James Harrison, the oft criticized football player – rather punisher – of the Pittsburgh Steelers has now found time to make comments regarding safety of players brains.  I will admit that this tact is much more productive than blaming “soft” rules for his repeat offenses of the illegal hitting rules.  I suppose he would be a very good “test subject” for a new product that may provide protection of the head;

After enduring what he estimated as “double digit” bouts with concussion-like symptoms throughout his decade-long career, Harrison began using a special layer of padding inside his helmet last fall and is pleased with the results.

“I haven’t seen any spots or had any blackouts,” Harrison said Tuesday.

Although the article and the statements from Harrison seem more like an advertisement, it is clear and important to remember that the CRT technology does not and will not prevent concussions.  Interior padding is something helmet companies have been working on over the years; it is the place on this piece of equipment where changes can have an impact – rather reducing impact.

Before everyone runs out to get the CRT technology, which in my opinion has real and definite helpful qualities for its other uses, we need to remember that concussions are mainly a result of END_OF_DOCUMENT_TOKEN_TO_BE_REPLACED 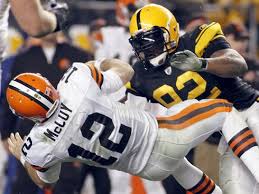 Mike Florio of ProFootballTalk does a great job of covering the NFL.  He has great observations and fact based information that those who read about the league find informative and refreshing.  One such entry from Florio came today in his Week 4 10-pack;

Time and again, we see a player who apparently has suffered a concussion, but whose injury receives a different label altogether.  Whether it’s neck or head or jaw, teams know that mere utterance of the “c” word knocks a guy out for the entire game.

On Sunday, the Steelers said that linebacker James Harrison suffered an eye injury.  Harrison insists that he didn’t suffer a concussion, claiming that the forehead pad in his helmet hit him in the eye after he made a tackle.

The only problem with this is that the injury appeared to happen on a helmet-to-helmet hit from Texans left tackle Duane Brown, and the video doesn’t show any padding sliding into Harrison’s eye.  And he didn’t make the tackle on the play. END_OF_DOCUMENT_TOKEN_TO_BE_REPLACED

James Harrison is not showing remorse in a post game interview published by the Cleveland Plain Dealer.  I will let you read it and decide for yourself.  However here are some quotes from him;

“I thought Cribbs was asleep,” said Harrison, the 2008 NFL Defensive Player of the Year. “A hit like that geeks you up — it geeks everybody up — especially when you find out that the guy is not really hurt — he’s just sleeping. He’s knocked out, but he’s going to be OK. The other guy, I didn’t hit that hard, to be honest with you. When you get a guy on the ground, it’s a perfect tackle.”

Well James, you don’t just go to sleep playing football unless you sustain a brain injury.  Now Harrison speaks on the Massaquoi hit:

“If I get fined for that, it’s going to be a travesty,” Harrison said. “There’s no way I could be fined for that. It was a good, clean, legit hit. He came across, I put my head across the bow. I could have put a lot more into that hit than I did.”

I am going to say he will be fined 20 large or more.  And in the NFL, you do have to have the warrior mentality, but one should know that lowering the head to use the helmet as a weapon is not only dangerous to the other guy, buy yourself.