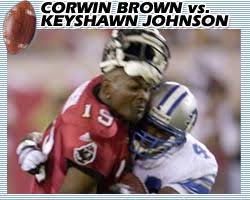 The former Michigan star and coach for Notre Dame has been hospitalized due to a self-inflicted wound after a stand-off in his Indiana home.  Fox News has the report;

A statement released by Brown’s family said he became suspicious, distant, gloomy, exhausted and depressed after playing eight seasons in the NFL.

“We believe Corwin is suffering from symptoms similar to those experienced by the late Dave Duerson and were caused by the many notable collisions during Corwin’s career in the NFL,” the family said. “For those reasons, Corwin chose to not disclose his symptoms, as he did not want to bring shame to any coach, team, organization or the NFL.

“We can no longer remain silent and we believe it is important that his former teams, teammates, coaches and the NFL to understand the severity of this situation.”

There is no identification or diagnosis of chronic traumatic encephalopathy (CTE) while living, it is a posthumous discovery.  There have been reports of those being diagnosed with CTE having a similar “downward spiral” near the end of their lives.  It is most likely it will be unknown if Brown has CTE anytime soon, the family believes that he has some “hallmark” signs of the devastating disease.

The comments from the family continue to show the “machismo” of the gridiron greats as things begin to unravel later in life.  As players are saddled with difficult problems with age they refuse to show weakness and seek help, hiding when they should be seeking information.  Doing the right thing and letting people know will only help with the identification of long-term issues, but can also be live “subjects” to determine if CTE is the problem it seems to be.  What is very important to remember, there could be co-morbidities associated with this case.  Leaping to conclusions can be disastrous, let time tell and Godspeed to Corwin Brown.