“The thing that I worry about,” Kariya said in an interview, “is that you’ll get a guy who is playing with a concussion, and he gets hit, and he dies at centre ice. Can you imagine what would happen to the league if a guy dies at centre ice?”

Paul Kariya was a super-star of his time, after sitting out the last year due to post-concussive events he has decided that 989 points in 989 games was good enough to call it a career.  In a VERY candid way by calling out the NHL for what he sees as a major issue with the sport, article from Mail and Globe and Eric Duhatscheck;

Kariya believes that because there are no visible outward symptoms of concussion, NHL teams tend to play them down to their players. He contrasted it to the treatment levels accorded to a player who suffered a major knee injury. END_OF_DOCUMENT_TOKEN_TO_BE_REPLACED

Dr. Patrick Neary of the University of Regina has begun to research further the pathophysiological effects of a concussion in hopes of earlier and better detection.  Anne McIlroy, a science reporter for the Globe and Mail has written about Dr. Neary’s efforts as of late;

Ultimately, Dr. Neary would like to develop new diagnostic techniques that a trainer [athletic] or doctor could use in a dressing room and that would identify a concussion in a player like Pittsburgh Penguin star Sidney Crosby, who said he felt no symptoms after being blindsided in game on Jan. 1. Four days later, he was crushed against the glass by a Tampa Bay Lightning defenceman. He hasn’t played a game since.

We have seen that there is a cascade of effects going on with a concussion, and Dr. Neary and his team are trying to pinpoint certain events, such as blood flow.  Although none of the information has been published there is some interesting findings that were reported;

The differences in cerebral blood flow between a concussed and a healthy brain are subtle and there is a wide range of natural variability between individuals. So, Dr. Neary devised two small challenges to help him identify signs of a concussion.

He asks the athletes to hold their breath for 20 seconds, then to breathe normally for 40 seconds, and to repeat the exercise five times. In healthy individuals, this results in significant increase in blood flow to the brain, but not, it appears, in concussed athletes.

In the second challenge, similar to the first, he asks them to hyperventilate for 20 seconds. This normally decreases the flow of blood to the brain, but the drop is more dramatic in concussed individuals.

A peer at the National Research Council, Ryan D’Arcy is working on the electrical portion of the equation;

Concussions can also alter the electrical activity of the brain.

The National Research Council’s Ryan D’Arcy is working on a portable device that he hopes will be able to detect some of these differences. In particular, he wants to know how a concussed brain responds to different kinds of stimuli, including tones and verbal statements.

All of this research will lead to better awareness, detection and management. 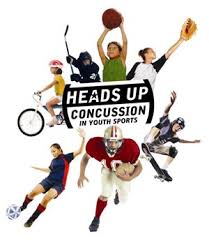 Beverly Smith of The Globe and Mail ran an article about adults looking back and not ready going forward; the past head injuries/concussions bring a lot of doubt in their mind.

Mr. Greenaway believes he suffered five or six concussions from the time he was 10, playing football in Toronto until he was 30, when he played a University of Toronto alumni football game and landed in hospital, getting a CT scan and waking up to his nephew and niece giggling at him.

But with all the revelations that have surfaced recently about long-term, profound neurological degeneration among hockey and football players, Mr. Greenaway doesn’t think it’s funny any more. He hears stories about how to help vulnerable young athletes and National Hockey League players, but knows there are hundreds of people like him who suffered multiple concussions years ago. What do they do to prevent symptoms like those of Bob Probert, Reggie Fleming and Marty McSorley?

In action on Tuesday night, a peculiar situation occurred where Toronto Maple Leaf Mikhail Grabovski took two hits to the head from Boston Bruin defender Zdeno Chara, the second of which resulted in some issues for Grabovski;

However both the player (Grabovski) and his general manager, Brain Burke are adamant that he did not suffer a concussion according to a Globe and Mail article.  From a PURELY observational position we noticed that he not only lost his ability to stay on skates after the second hit, his balance was disrupted enough for him to stumble getting to his skates and the bench.

Burke had this to say during a radio interview;

Uhhhhhh….  Disorientation IS a symptom of brain function disruption, as well as loss of balance.  Just because he scored the game winning goal late in the 3rd does not excuse this oversight.

The National Pastime in Canada has not been without its share of traumatic head injuries.  For years the “tough-guy” mentality of the sport did not allow for players to concede what was happening to them.  As is common with most collision sports, the fact that your head hurts after a game or a specific incident does not warrant attention from medical personnel.  That stigma in hockey is beginning to change thanks to the help from Dr. Paul Echlin in Canada.

Echlin, a sports medicine specialist who has been associated with junior hockey for nine years, ascends the pulpit again in Toronto on Monday, with more accumulated evidence to make parents, coaches and hockey players pay close heed. A brain injury stays with you and can even be permanent, they will hear, as Echlin unveils the results of the independent Hockey Education Concussion Project.

In this presentation there will be loads of information about how concussions and head injuries were viewed by the athletes themselves and other support people.  To be honest, it’s kind of scary, but it is not unlike what we have seen in other sports, most notably football.

Two out of three players in one minor-hockey study by Toronto neurosurgeon Cusimano didn’t know they could suffer concussion injuries without losing consciousness. At least half the players couldn’t identify a concussion at all.

Education is the key, as we have been trumpeting since day one on this blog.

Read the full story from The Globe and Mail, by James Christie.