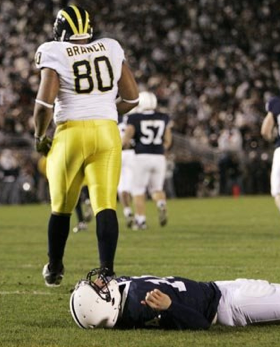 For quite some time now we have been compiling data regarding reported concussions in Division-I NCAA college football, taking note of rates of reported injury as well as the implications that such injuries have placed upon the players themselves.  As before mentioned in a post covering the absence of requirement in NCAA teams reporting injuries, we understand that this study will not be that of an exact science, but it should and will point to several issues on this subject.  The questions that we may raise from this study include inquiry on the prevalence of concussions in this level of football, how the injury is distributed amongst different age groups, how teams may or may not find purpose in not reporting concussions alongside other common injuries, how repetitive injury may impact one’s playing career, and most importantly- should the NCAA be required to report injuries?

Right now, such questions are left to debate and statistical evaluation.  Reporting concussions is analogous to reporting weakness in this level of play, and much so applies to all aspects of contact sports today.  What we have gathered through numerous resources made available online (and for that matter, it has been quite a challenge to track down concussions in the NCAA via Internet) is more so a statement to be made to the general public, for media fatigue and a lack of specialization to compartmentalize this injury aside from others has yet to be available to us.  This study intends on bringing more focus on concussions in college football, and hopefully may lead to more research-based and awareness-provoking paths.

As we enter Week 6 of the 2011-2012 NCAA college football season, here are the numbers to what we are looking at in relation to the incidents of concussions in Division-I programs… END_OF_DOCUMENT_TOKEN_TO_BE_REPLACED