Not long after that, Dustin Keller of the Jets jumped in the air and landed on his back/head.  The officials did a good job of summonsing the med staff to Keller.  Keller was subsequently removed evaluated on the sideline and locker room, where it was determined that he did not suffer a concussion.  In an extremely rare occurrence, the Jets medical staff answered questions END_OF_DOCUMENT_TOKEN_TO_BE_REPLACED 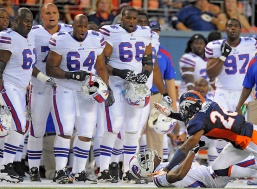