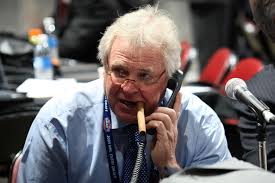 Boca Raton, Florida will be the site for the “Spring” meetings of the National Hockey League’s General Managers as they discuss League issues.  I bet you cannot think of what might be the hottest topic.  Last March the GM’s came up with Rule 48; penalizing players for blind side hits to the head.  As USA Today and Kevin Allen note those types of hits are down, but the concussions are up;

“The concussions resulting from hits to the head, whether you categorize them as legal or illegal, are actually down this year,” said Bill Daly, the NHL’s deputy commissioner. “For whatever reason, we are getting more concussions, either from accidental contacts or secondary contacts, by a player hitting his head on the ice, after being hit legally body to body or hitting his head against the boards.”

Concussions were going to be on the docket this week, however there seems to be more urgency since the Chara/Pacioretty incident in Montreal last week.  The hit was ruled “part of the game” and as one of our writers, Nick Mercer put it, those hits are exactly the ones causing the concussions across the league.

What the GM’s need to understand is that there is a myriad of events occurring that are causing the numbers to rise.  END_OF_DOCUMENT_TOKEN_TO_BE_REPLACED