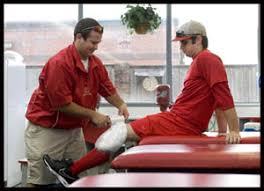 Athletic Trainers are also on the forefront for concussion awareness, education and assessment, often the first allied health care professional to see the problem and identify it.  As much as I hammer home END_OF_DOCUMENT_TOKEN_TO_BE_REPLACED If it becomes a problem at the college level, what does that say about the lower levels?  I agree that head-injury issue is the biggest END_OF_DOCUMENT_TOKEN_TO_BE_REPLACED