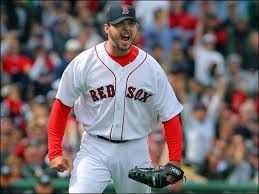 Josh Beckett of the Boston Red Sox was struck in the head by an errant ball while in the outfield during Spring Training in Florida.  Initially he was assessed as “OK”, however;

After first saying that pitcher Josh Beckett was OK after getting hit in the head with a ball Monday, the Boston Red Sox later said he was experiencing symptoms consistent with a mild concussion.

Beckett, who was standing in left-center field, went to one knee after he was struck in the left side of the head. Teammates immediately called for the training staff, and he was escorted off the field with his hand on his head.

The Red Sox said the pitcher did not need to be taken to the hospital and was treated at the park. The team later sent him home to rest.

This is a terrible accident but it goes to show that concussions can happen in most circumstances on the field of sport.  There is an issue however in this, the reporting of “mild” should not be to qualify the injury of concussion, rather the symptoms occurring.  What is important is that a concussion is a concussion.  I was relieved that the Red Sox have changed their tune, when I first heard the report I was a bit skeptical about him not having an issue related to concussion.