I missed this case of another NCAA athlete that quite possibly was mismanaged.  We discussed the Josh Huff case in the Rose Bowl yesterday, HERE.  Thanks to an astute observer and commenter, presumably an athletic trainer, here is what happened, thanks Bryan (BTW it is you the reader that help us with the stories that matter);

Watching the Miss St. / Wake Forest Bowl game yesterday, the game kicked off for the second half. WF returned the ball and Miss St. DB Wade Bonner (#7) assisted on the tackle on the WF sideline. At the end of the play Bonner lay on the sideline on his stomach pointed towards the field. For a few moments he didn’t move, then got up gingerly and attempted to run forward. He instead went directly sideways for 5 yards, nearly running over the side judge spotting the ball at the end of the return. The side judge obviously noticed he was not ok and held on to him and turned across the field and motioned for help.

At this point the camera switches to the WF QB who is doing the college football routine of “Stare at the sideline blindly waiting for the coach to make up his mind about the play call”. Assumed it was taking so long because they were getting Bonner off the field. Wrong, just as WF walked to the line, the same side judge had to hold the game, run to the defensive safety spot where Bonner was lined up for the next play and make the Miss St. staff come get him. Good for the ref for following his responsibility and making him sit out.

So what happens? You guessed it. Less than a minute later END_OF_DOCUMENT_TOKEN_TO_BE_REPLACED 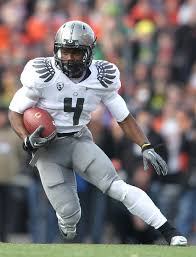 In the second quarter of the Rose Bowl, Oregon wide receiver, Josh Huff, was hit in the head while attempting to make a catch.  He tried to get to his feet, then fell back down.  He was attended to by Oregon’s medical staff on field.  When he rose to his feet it was VERY CLEAR to those watching he had balance disturbance.  He could hardly open his eyes and squinted and grabbed his nose.  As he was walking off the field his “straight line” to the sideline looked more like someone who had too many to drink a few nights ago.  (here is the video and take from SB Nation), from SB Nation as well;

He tried to stand up, staggered his steps, then fell back down again. Huff is one of the best receivers Oregon has, at a position where the Ducks are already thin on the depth chart.

He was removed for the remainder of the half.  After the extended half time the “sideline princess” of ESPN, Erin Andrews notified all of us watching that Huff “only had his bell rung” and was going to return in the second half.