Terry Ott has filed this BREAKING NEWS in regards to Canadian Football and the Concussion Issue.  We here at The Concussion Blog are pleased to bring this information to you…  You can find the FILED CLAIM HERE.

“Contrary to (popular) opinion, the sports press likes to fling incense, be part of the show, create stars, and to that end prints and televises a fraction of what it knows.” –Mark Kram, formerly of Sports Illustrated July 16, 2014Hamilton, OntarioThe first lawsuit brought against the CFL member teams and others for concussion injury has been filed in Vancouver, British Columbia in the Supreme Court on behalf of Arland Bruce  III, a veteran of 12 seasons as a speedy wide receiver who last played for the Montreal Alouettes in 2013 and also starred on two different Grey Cup winning teams as well as spending the 2003 season with the San Fransisco 49rs.Bruce, noted in the claim as an “unemployed football player,” is the holder of the record for most receptions in a CFL game (16) and is a three-time CFL All Star.The claim, so far for unspecified monetary damages, asks for general damages, special damages, general and special damages “in trust” for the care and services provided by his family, and punitive and aggravated damages.In the claim filed by the Vancouver law firm of  Slater Vecchio LLP and lawyer Robyn L. Wishart, it is alleged that Bruce suffered a concussion and was knocked unconscious in a game played in Regina, Saskatchewan on September 29, 2012 between the BC Lions — Bruce’s team at the time — and the Saskatchewan Roughriders.Bruce subsequently returned to play for the Lions in a playoff game on November 18, 2012 and it is alleged that he was still suffering from his previous concussion and it is also alleged he suffered additional concussive and sub-concussive hits during the  Nov. 18 game.From a copy of the claim, not proven in a court of law, it alleges in part:

After the 2012 season, Bruce left the BC Lions and was signed for the 2013 season by the Montreal Alouettes.Also from the claim: “Further, despite the fact that the plaintiff was displaying the ongoing effects of concussion to medical professionals  and coaching staff, he was permitted to return to play in the 2013 season for Montreal.”In a 2011 Yahoo! Canada  Sports 55 Yard Line  article by Andrew Bucholtz,  and so noted in the claim, commissioner Mark Cohon said “I am convinced that every concussion is being reported and dealt with. I trust our  doctors. I trust our therapists. I trust our teams to report that.”And in the 2011 Canadian Football League  concussion “Campaign” directive to the CFL clubs from Cohon advised to “err on the side of extreme caution” when dealing with suspected concussion injury.Those familiar with my series “3rd Down, CTE To Go,” for the Concussion Blog in 2013 will recall former CFL player Leo Ezerins, now communications director for the Canadian Football League Alumni Association, and Dr. Charles Tator, of the University of Toronto, Krembil Neuroscience Centre, and the Canadian Sports Concussion Project. Both Tator and Ezerins believed there were “more questions than answers” between concussion and brain trauma and that “extreme caution” be used in any subsequent diagnosis of CTE.Accordingly, Ezerins and Tator are named as defendants in the lawsuit and perhaps the most revelatory allegations — again not proven in a court of law — made in the claim are that Bruce continued to play CFL football after suffering concussion  and sub-concussive injuries because:  END_OF_DOCUMENT_TOKEN_TO_BE_REPLACED

If you visit here enough and take the time to look at the comments at the end of the posts you might notice a person named “Phil”.  He especially took time to comment on the work of Terry Ott and his seven-part series about CTE in the CFL.  Thanks to Terry and this blog we are all able to get the genuine views of a former player in the CFL, Phil Colwell, via The Record from Canada and Terry Ott;

Colwell’s brief CFL career ended in 1981 after a violent on-field collision in a game at Winnipeg Stadium. He was playing for the Toronto Argonauts on that crisp and sunny day in October.

Covering a kickoff, Colwell, a solid six-two, 195-pounder with sprinter speed, was blindsided through the ear hole of his helmet by a Winnipeg player and was knocked out cold. He lay motionless on the field while a trainer ran to his assistance. No penalty was called on the play.

This is the type of story that Ott has sent out to tell from the beginning, placing faces and human behind the issue that has become one of the preeminent problems with football.  Yes, this is not isolated to football but we would be remiss if we didn’t expose and tell the stories of the most oft afflicted in the “head games” we now find ourselves knee-deep in;

Colwell, who graduated from Laurier with a psychology degree, found work with a Scottish government agency but continued to suffer bouts of depression and mood swings. He says accompanying anger issues and self-medicating led to moderate bouts of short-term or primary memory loss. Colwell says he frequently “loses the right words.”

If you recall a few weeks ago I posted a request for some help for a journalist, Terry Ott of Canada.  It was simple, if anyone who reads this is a former Canadian Football (CFL) player or knows a former CFL’er, could they contact Mr. Ott for a story he is doing on concussions in that subset of professional football.  The good news was that people responded, albeit a small number, it was more than he was able to find doing his journalistic thing.  It made me happy that this blog could help out someone looking for information, because that is why it occupies a space.  But…………..

In the post below, that Mr. Ott wrote, you will see that by using this blog it may have stonewalled any help from the CFL, its Players’ Association or the Alumni Association.  Mr. Ott titled this post “CFL Follies” and I cannot think of a better title for what you are about to read.

I’d imagine that most reading this Blog will have heard of League of Denial.

But, I doubt you have heard of League of Non Denial, Denial.

Because after three months of dodge-ball dealing with the CFL about the concussion issue past, present and future, I was, after some initial boiler-plate information given in October, told today that my follow-up questions were “loaded” and would not be addressed by the CFL. (The questions are at the bottom of this post, and you can make up your own mind if they were “loaded,” or not.)

In addition, the CFLPA will no longer respond to my END_OF_DOCUMENT_TOKEN_TO_BE_REPLACED

The Fifth Estate of CBC aired a documentary on the “Greatest Football Team Ever” in Canada, not as a retrospective homage to the good times, rather as an unfolding mystery.  The most peculiar thing about this very good documentary is that it was originally aired, not a year ago, not even two but in 2008.  Much has been discovered about repetitive brain trauma since 2008 the video is haunting just to view it with “today’s” eyes.

They have been called the greatest football team in the history of the CFL — the Edmonton Eskimos of the 1970s and ’80s that won five consecutive Grey Cups. But, for some of the star players on that team, the years of triumph ended ingloriously in early deaths, from heart attack, suicide and misadventure. The tragedy of those early deaths was often compounded by alcohol or drug addictions, probably caused by another, less visible, killer. Recent research by neuroscientists now shows the link between on-the-field concussions and brain damage; a permanent injury that can lead to depression, suicide and severe aberrant behaviour. The damage is so profound, the researchers say, that post-mortem examinations of the brain tissue of five former professional football players can be compared only to the tissue found in the brain tissue of advanced Alzheimers cases.

Unfortunately I cannot embed the piece you can CLICK HERE to see it in full.  You will get to hear from very important people who are not nearly as high-profile as those hailing from Boston; Dr. Julian Bailes, Garrett Webster, son of Mike Webster and Dr. Bennet Omalu. 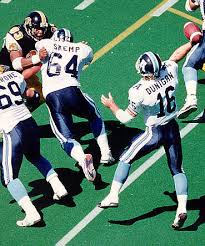 The memories of Matt Dunigan are both good and bad from his years in the Canadian Football League.  Unfortunately, the recent thoughts to his past have made a profound statement about concussions in sports, in particular football;

How far has post-concussion syndrome penetrated the culture of sport? Witness the tear-streaked face of former CFL star Matt Dunigan in his interview with Brian Williams last Friday on TSN. In a shockingly personal segment, Williams led Dunigan though the hell brought on by at least twelve diagnosed concussions in his playing career. The troubled private life of a very public athlete (Dunigan won two Grey Cups) was put in a new perspective as he wept beside his wife.

His wife went on to tell the audience the Dunigan forgot how to laugh and lost his sense of humor, basically becoming a END_OF_DOCUMENT_TOKEN_TO_BE_REPLACED