For some time the thought was that the mTBI, TBI and concussions suffered on a playing field were different from what was being experienced on the battle field.  The mechanisms may be different (collisions versus blast injuries) in nature but the resulting devastation may be similar.  Again we can look to the northeast to Boston University’s brain bank and researchers for this new finding;

Scientists who have studied a degenerative brain disease in athletes have found the same condition in combat veterans exposed to roadside bombs in Iraq and Afghanistan, concluding that such explosions injure the brain in ways strikingly similar to tackles and punches. […]

“Our paper points out in a profound and definitive way that there is an organic, structural problem in the brain associated with blast exposure,” said Dr. Lee E. Goldstein of Boston University’s School of Medicine and a lead author of the paper, which was published online Wednesday by the peer-reviewed journal Science Translational Medicine.

The paper provides the strongest evidence yet that some and perhaps many combat veterans with invisible brain injuries caused by explosions are at risk of developing long-term neurological disease — a finding that, if confirmed, would have profound implications for military policy, veterans programs and future research. 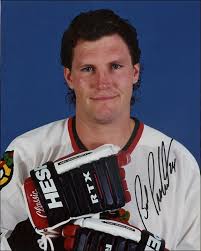 On Thursday, Boston University researchers will release findings that show Mr. Probert had chronic traumatic encephalopathy (CTE) when his heart gave out during a fishing trip last summer. The diagnosis makes him the second former professional hockey player to be found with the degenerative disease after Reggie Fleming, who died in 2009 at the age of 73 with dementia after three decades of worsening behavioural and cognitive problems.

Like Mr. Fleming, Mr. Probert was a fighter who banged his way through more than 200 fights during 16 seasons with the Detroit Red Wings and Chicago Blackhawks. He had suffered at least three concussions and struggled with substance abuse. And in his 40s, Ms. Probert said, her normally laid-back husband may have begun to show some of the telltale signs of CTE, such as odd bouts of road rage and memory gaps.

Bob Probert found himself, along with his wife, wanting to do something for this cause.  A mere six months prior to his death, due to a heart attack, he committed himself to the legacy of brain research and the NHL.  For reasons unknown the professional hockey END_OF_DOCUMENT_TOKEN_TO_BE_REPLACED

It’s not often that I come across a news article or research paper that stops me in my tracks. By that, most information has become known to me though my circle of “concussion friends” or leads that the public sends my way.

There are times when Alan Schwarz writes, I feel as though he is breaking news, which to me is exciting. But getting the back story on someone or something really stops me. To learn what people have done and gone through to dedicate themselves to a particular cause starts to paint a picture.

Yesterday Caleb Daniloff wrote an article for BU Today in the World, about the Center for the Study of Traumatic Encephalopathy. This is an article that all people, not just researchers or professionals, should take time to read. It’s about how the CSTE is going to make the sports we love safer and lives we live longer.

At the time of McKee’s discovery, Grimsley was the fifth former NFL player diagnosed with CTE. The untimely deaths of the others often followed years of strange behavior. “Iron Mike” Webster of the Pittsburgh Steelers, felled by a heart attack at 50, took to living in his truck and at train stations and tazing himself to relieve back pain. Steelers lineman Terry Long, 45, killed himself by drinking anti freeze. Philadelphia Eagles defender Andre Waters put a gun to his head at age 44. And 36-year-old Steelers lineman Justin Strzelczyk died in a high-speed police chase.

For years, the NFL downplayed the link between head blows on the field and brain damage later in life. The league’s medical advisor had this to say about Guskiewicz’s 2003 findings: “When I look at that study, I don’t believe it.”

The article is more than just finding information on CTE, and what its destructive behavior might be.

In early October 2009, as BU’s School of Medicine was gearing up to host a conference on athletes and concussions at Gillette Stadium, in Foxboro, Mass., home of the New England Patriots, the results of a long-touted study commissioned by the NFL had leaked to the media. The research showed the prevalence of dementia, Alzheimer’s, or other memory-related diseases among retired players to be as much as 19 times higher than in the general U.S. male population. The league claimed the study was incomplete. Further findings, it said, would be needed. “They had a very bizarre reaction,” Nowinski says. “They paid for the study, yet they tried to distance themselves from it. But you understand their position. The guys who commissioned the study are probably not the same guys who had to react to it.”

I encourage everyone to visit the Sports Legacy Institute via the link on the left.  This is a great initiative that began in 2007 with the ideas from Chris Nowinski.  Headed on the medical side by Robert Cantu, MD this program is the leader in CTE research.

One of the most feared hockey players, Bob Probert, will have his brain donated to Boston University and the research center.  This is the same center that did the research on Owen Thomas’s brain, and is on the forefront of CTE research.  Bettor.com has run a story about the hard decision his family made, for the betterment of hockey and athletes.  Another player who has planned to donate his brain to BU is Keith Primeau, he said in the article;

“There was a period of time where groin injuries were front and centre, and knee injuries were front and centre, but they began to build it into their business model,” he said in 2009. “They accepted the fact that players were going to miss time because of sports hernias. To me, the head is so much different than just a torn abdominal muscle or a torn knee, in that it can be life altering.”

It will be interesting to see the results.

Another post on Owen Thomas and what researchers have found.

As we discussed previously chronic traumatic encephalopathy was found by Ann McKee at Boston University.  This case is EXTREMELY unique on many levels.  First, Thomas was the first college aged individual to show CTE, secondly he was never diagnosed with a concussion.  However, being a lineman in football he was exposed to thousands of head hits throughout his career.

Here is a video with his mother and the full story found at bu.edu;

This particular topic of concussions will be more on the “front burner” as time goes on.