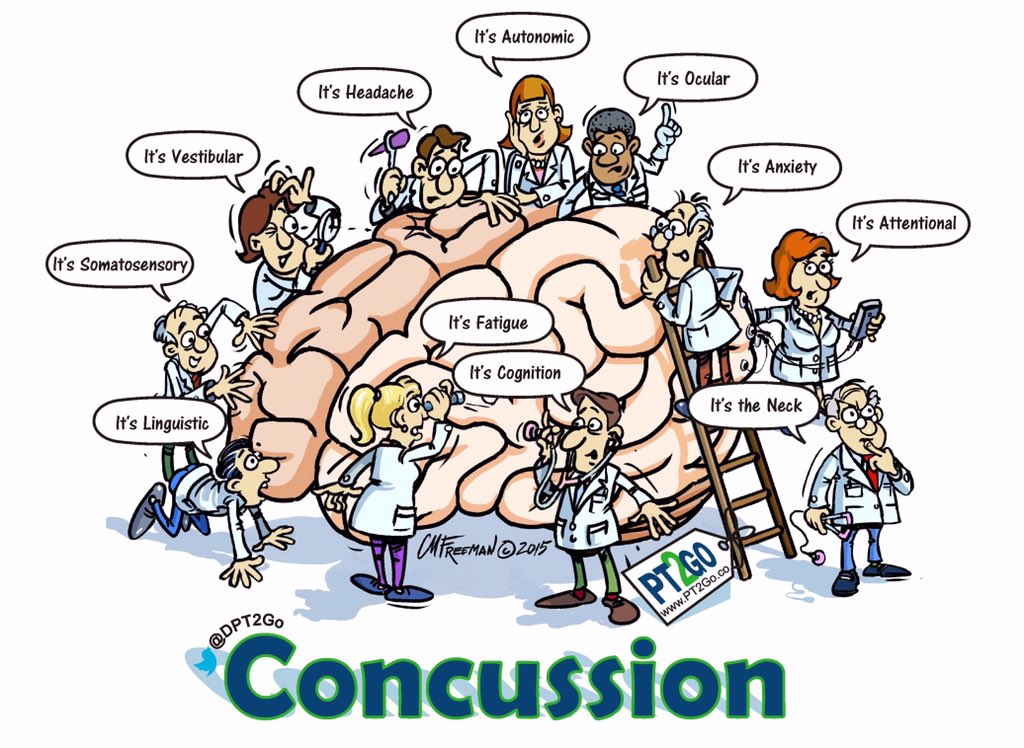 Sure, this is the fifth post of 2016 – and its July – however there is a good reason for it. I continue to be an on the field athletic trainer, I continue to educate on concussion, I continue to be active on Twitter but more importantly I am concentrating more on being a father and husband. Blogging ain’t easy, folks; let’s be honest the coverage of concussion has blossomed well since 2009 when this blog started.

All of that being said, I am also in the process of gaining further education in concussion. This is not your typical education about the injury but right were my mantra for the past six years has been:

The injury of concussion is not the true problem; it is the mismanagement of this brain injury that is the real issue.

As noted in March I began the Evidence in Motion Concussion Management Course. This is a 34 week program that was designed to bring collaboration and current information to those that can impact the real problem of this injury, the clinicians.

We have arrived at the half way point in the program, marked by the weekend intensive course – which met in Chicago this past weekend. Many have wanted to know has it been worth it. The answer is unequivocally, YES.

Before I get to the hands on of the weekend let me recap the first half of the program. One word cannot do it justice but in our search for snippets of information and quick reaction, that one word could be “trailblazing”.

Previously I wrote about how the program was basically going in terms of mechanics and what we were doing at the time. Since then I have read more research (current), discussed, and most importantly learned how to better help those that have been concussed.

Those seven weeks, plus the last week of summary were probably the most challenging for me in terms of timing and my work/home schedule. Yet, I could not wait to read, watch and interact with my cohorts each week. I was engaged the entire time. Even with the subject matter I may have struggled with (vestibular) previously I was able to learn in a way that made it completely applicable to me as an athletic trainer. In fact, I have been implementing processes and techniques into my training room, real-time.

Before beginning not only was I apprehensive about the time demands and testing, I was also concerned about the weekend meeting where we got hands on and dove deeper into specifics as clinicians. I knew I was going to be one of the few dedicated on-the-field ATs in the room (in fact only one other was there among the 30+ in attendance); fearful of the stupid stuff of profession bias and my education. I couldn’t have been more wrong.

EIM has labeled this as “weekend intensive”, and the term “intensive” is not enough to describe the depth and breath of what we had the opportunity to learn and discuss. Both Jessica Schwartz, PT, DPT, CSCS and Michael Furtado, PT, DPT, NCS were our faculty. They probably have forgotten more about their niche in concussion than I have ever learned in all of concussion. Heck they were both summonsed to the AAN concussion conference in Chicago happening at the same time to meet and greet.

Not only did I meet some wonderful and smart clinicians (mainly from the Chicagoland area) but I was able to learn MORE info on how to help my community when it comes to concussion. The take home points I got from this past weekend were:

The overall impact and goals of this course is not to churn out these credentialed individuals that will have the best and most current education at that time (we know concussion is constantly changing). The overall goal is to develop clinicians within the TEAM who treat concussion that can relate, communicate and supplement one another to get those injured better, faster.

I can say as an athletic trainer not only is this needed this is paramount; all clinicians (AT, PT, OT, SLP, MD/DO, PysD, and the whole alphabet soup) need/must be on the same page and help one another. We have to stop the “owning” of the injury and work as a team. A team that not only includes the clinicians but the patient, caregivers and the community.

I am looking forward to the second half of this course and wrapping this up, but I am not excited about not being in this cohort and part of this group on a daily basis. Rest assured that I will be calling my classmates, as I would expect them to talk to me.

Get yourself in a place to take up this certification course; forget the time barriers (if I can do it as an AT father/husband with three kids under the age 11) anyone can do it.