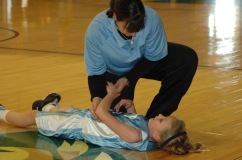 The education of concussions is great, the legislation is in the right place but there is absolutely no accountability for instances where athletes are “failed”.  Before I go on, I am not perfect, I have and will continue to miss some things here and there (I missed an ACL in football which bothers me).  In fact, looking at the pressure I put on myself and hoping the world puts on my chosen profession of athletic training it may be a bumpy road.  However, missing obvious problems of health and welfare of athletes when one is an athletic trainer is inexcusable.  I implore anyone out there that feels I have missed something to call my ass to the carpet as well.

This brings me to something that I found in my inbox recently and it made me sick and should be handled.  This particular incident occurred in a state that has similar mechanisms for concussions as here in Illinois.  To create the back story on the “mechanisms” in play you should understand the state legislation and high school association concussion education;

With that information here is the email from a fellow athletic trainer – emphasis added is mine – (obviously stripped of identifying information);

Still have a long road ahead of education.

I was at a basketball game Friday night as a spectator and watched a player bounce [their] head off the floor.  Opponent had set a screen and athlete ran right into [defender], bounced off and landed on floor bouncing head off the floor.  The player then rolled around on the floor grabbing head and could tell [athlete] was in pain.  Time was called by the officials to attend to the player.   MOI would strongly suggest concussion and right there warrant being pulled and not allowed to reenter.  Coaches come out and eventually they get player up and walks [athlete] off.  I made sure to observe jersey number as I had a feeling [the athlete] was going to go back in.  I saw no one evaluate the player.  After a few minutes, the player came back in.   I’m not sure how long the player was in when they ended up on the floor again – again bouncing head off the floor.  The player was subbed out and spent the rest of the game on the bench.

The player should have not been allowed to reenter the first time.

The coach and officials failed the athlete as did the “athletic trainer” that was listed on the program.

Was so frustrating to watch.

I stewed on it all weekend and did notify the [high school association] that the protocol set forth by the state was not followed by the coaches nor the officials.

The system failed that athlete.

The last sentence is absolutely correct, if we as a society are to put things like this in place to protect our student-athletes we must follow through.  Yes, there will be mishandled cases – this is certainly not the only one in this particular state, ever, nor all over the United States – but when there is an issue people must be held accountable.

In these parts, when an official sends off a player they are “booked” and personnel is notified the player is not to return until cleared by proper medical personnel.  That personnel is identified prior to the game and they are the only ones that can report to the official about allowing that person back into play.

In football I meet with the officials prior to the game to make myself known as the “concussion guy” on our sidelines (unless my team doc is there).  When a traveling lower team arrives they know I will be the one making the call for them as well while they are guests.  In basketball I notify the visiting coaches and officials that I will be the only one in the gym making the return to play call, unless they have an athletic trainer or MD/DO that is present at that moment.  If they are not present prior to tip-off I inform them for the safety and liability of the school I will make all calls.  In the spring sports it is more of the same, I am clearly identified as the medical professional that will be making the RTP on possible head injuries.

The point being that along with education we have to be proactive and clearly establish who we are and that we know what the hell we are doing.  By doing this it reminds the coaches and officials of the mechanisms they are responsible for when dealing with a concussion.

Back to this case, it is entirely plausible that the officials missed the injury (they did call time out for it) – they officiate.  It is less likely that the coach(es) missed the injury and knowingly removed the player because of the thought of injury.  It should be considered abhorable if the presiding PROPER medical professional missed the injury or communication from coaches/player about injury (we turn our heads at times or even have to go pee so communication is key).  It appears from our email and astute observer that a full screen/evaluation for concussion was not performed; WHICH SHOULD NEVER HAPPEN considering mechanism of injury.  Now the kid possibly sustained two insults to the brain in succession…  Good luck with a quick (8-14 day) recovery if being truthful.

Again: THE ISSUE IS NOT THE INJURY OF CONCUSSION; RATHER THE MISMANAGEMENT OF BRAIN INJURY. (see above)

4 thoughts on “Have To Keep Educating & Holding People Accountable”