The Concussion Blog Original, NFL Concussion Report, is a weekly compiling of the reported head injuries in the National Football League.  Concussions are added to the list each week from multiple sources to give you the reader a picture of what is happening on the field.  Each week we will bring you the information along with relevant statistics.  If we have missed a concussion or put one on here erroneously, let us know (we will also be using Fink’s Rule to classify a concussion/head injury).  It also should be noted that due to the league not disclosing actual injuries until Friday night there may be some added to next weeks numbers.

It has been weeks since you have seen us post about the concussion numbers in the NFL.  A quick explanation; at the end of the year with trouble finding Week 17 numbers we search for a few days, then we sit on numbers and cross check with sources which takes time.  Finally going through and I.D.ing other factors like helmets and new parameters takes some time.  It also helps that the past few years the NFL waits until Super Bowl Week to release their numbers.

Let us first opine about the released NFL numbers via NY Times;

In the preseason and the regular season, players sustained 228 concussions, down from 261 in 2012, when concussions rose 4 percent compared with the previous year. Helmet-to-helmet contact caused almost half the concussions this season, down from 53 percent in 2012. But more concussions occurred when players hit their heads against an opposing player’s knee or the ground.

The whole number for the season is only nine off from what we collected here.  Which tells me that what we are doing is as accurate as you can find anywhere outside of the NFL (actual players notwithstanding).  But where were the missed nine?  I happen to think its a combination of preseason and Week 17.  So, we are happy with our collection system.

Now, for HOW those numbers dropped that is open to interpretation.  The NFL obviously stated that it had to do with rule changes and enforcement of rules along with higher scrutiny by on field personnel.  I think they are spot on with the assessment that helmet-to-helmet hits resulting in concussion dropped, there has been less of that happening, which is good.  But after listening to current and professional players the past few days discuss this topic I am fearful that some of the drop may be due to heightened awareness by the players; of what everyone is looking for.  With all due respect to the players they are pretty dang good at switching off the pain and fear portions of their psyche.  That is a candy-coated way of saying they are still and may be better at hiding the injury.  If you read the article Chris Nowinski seems to think that this number is only 90% of actual concussions happening in the NFL.  That sounds crazy, because that means over 2200 concussions occur.

I happen to think the “true” number – which we will NEVER find – is closer to what Nowinski thinks than what we found.  Again, using perspective from players and the nature of the game at the professional players I think the number is closer to 1/team/game – at the minimum.  Which means I think there is AT MINIMUM 520 concussions in the NFL each year.  At best that means we are missing at least 50% of concussions.  A prominent sports writer asked me when I told him this “who is at fault if we are missing that many?”  The simple answer is the players.  Concussion is a subjective injury and until we find a reliable and specific objective technique to identify them it will always be on the player.

We didn’t get any more specifics from the NFL on positions or when these concussions occurred but I can give you what we found for the position breakdowns – note that this does not tell if the player received the injury during O/D/ST; 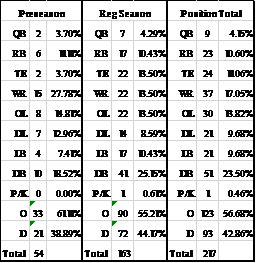 Sorry for the resolution but, you can see clearly that the Defensive Back is the most vulnerable to concussion, this has been the trend for the past four seasons.  It should also be noted that the Offensive Line had an increase late in the season.  There are plenty of other notable observations of these data, take a look.

In the years past I have taken this space to write-up some proposals for advancement in this area.  I have come to the resolution that professional players are in a class all their own and have a myriad challenges.  What I want to impart with this observational data is that if there are only 32 teams, and nearly 1500 players in this league alone what do you think is happening at the lower levels?  Where millions play the game.

A concussion is not unique to professionals, in fact we can make the case that concussions are much more likely at lower levels where training, bodies and brains are far inferior.

WE ALL NEED to effect change below the NFL, notably the youth and high school level.  Right now the medical coverage for them is woefully lacking.  I will stand on my soapbox now and state what I did at the United Nations just two days ago:

Lets begin there and work our way up.  This is something, that if people would just sack up and do, can make an overnight change for not only football – because this is not a specific sport issue – but all sports.  Not only can an athletic trainer find the issue, they can escort athletes through recovery and provide solutions on individual cases.  Oh, athletic trainers also deal with every other injury including life threatening ones.

Everyone needs to think hard but not long about this.  Start putting money where it can have the biggest effect, NOW!  Stop the minutia.