If you have been around enough you have seen the stylings of Matt Chaney on this blog, he is someone I call a friend.  In some circles that discounts me as a professional, which is both stupid and dumb.  I don’t always agree with Matt, heck him and I have been known to battle via electronic and phone communications.  However, his opinion is a valuable one – often his work is based in so much fact it makes your head spin as to why some of its missed.  Regardless, Matt has published two recent articles on his blog, for all to consume, here are some excerpts.

American football gets lambasted in public for maiming and killing, denounced by an influential movement of critics, and game officials pledge safer play based on their new concepts of prevention, including:

*Limits will govern length of practices.

*Every player will undergo medical prescreening.

*Experts will lead safety reform in rulemaking and research.

*Referees and coaches will enforce new rules of experts.

Sounds familiar, these steps, a practical recitation of talking points for contemporary “safer football” promoted by the NFL and commissioner Roger Goodell, in face of lawsuit frenzy against the league and sport in general, along with festering disgust in the public.

Except the football rhetoric is 119 years old, from 1894, a packaged response during the game’s initial siege against formidable opposition seeking abolishment.

Erstwhile math professor Eugene L. Richards outlined the football argument in a commentary he wrote for Popular Mechanics while at Yale University, unofficial headquarters of the American game as it were then, entertainment monopoly blossoming for select colleges. Richards, a former Yale football player, was close associate of alumni player Walter Camp, who became known as “Father of American Football.”

Camp pioneered play design and rulemaking for the game, and, equally important, he established a football public-relations framework with his prodigious communication of the sport, essays, books and speeches. Notably for this discussion, Camp personally crafted and disseminated feel-good themes of tackle football that endure, like manliness, education, industriousness, patriotism and social event, to obscure the irremovable, reprehensible byproduct of mass carnage for young bodies and minds.

Richards’ essay of November 1894, “The Football Situation,” stands as original template in football apology, timeless talking points that channel Camp’s defense of the gridiron. Richards responded to period critics who alleged football “evils” negated any “good,” and his assertions resonate today for the debate renewed, continuing:

*Football is part-and-parcel with a complete education.

*Football is salvation for youths everywhere.

Richards also penned an introduction for Camp’s book release that season, Football Facts and Figures, “a resoundingly pro-football polemic” that began with “a barrage of football propaganda,” observes author John Sayle Watterson, football historian. “Anyone who read Camp’s book, especially the introductory excerpts, might come away wondering what all the critical fuss was about. According to the ‘facts and figures’ so authoritatively interpreted, no one suffered permanent injuries, and all but a cranky handful agreed that football’s virtues outweighed its shortcomings.”

News writers go along, publishing official talk verbatim, as fact. Media also mistakenly interpret available injury data and minimize gridiron carnage: “There were 4.2 million high school and college football players in 2011, and only .80 per 100,000 received a serious injury–a rate lower than gymnastics and ice hockey for both men and women,” reports Annie Hauser for EverydayHealth.com, erroneously, ranging from her misstating estimated population of all football players to her relying on skewed in-house data.

Public misconception of terrible risk and outcome in American football, inspiring bogus comparisons with other activities, is rooted in decades of misleading research on “catastrophic” injuries that is funded by football itself. These so-called epidemiological surveys of football’s vast casualty realm, produced at the University of North Carolina, are beset by insurmountable limitations or faults, including: a) cases are restricted to injuries only of the skull, brain, spinal cord and/or vertebral column; and b) collection is inadequate for even those categories, missing many cases reported online.

Moreover, the in-house research ignores that impacts below neckline maim and kill players regularly, while the football environment also spurs lethal physiological conditions beyond brain and spine. Hazards to the human body are practically boundless in football, directly and indirectly.

See below for an annotated list of more than 150 known cases of the worst casualties in football during 2011, all passed over by the limited collecting for Mueller-Cantu reports.

And when you go to read the second article you will notice the tireless work done to catalog the catstrophic injuries that have been missed by the researchers.  Chaney is a good man with a good heart, albeit outspoken and extremely opinionated, but the man knows how to do work.  Give him a few minutes and weed through any hyperbole you believe is there and think – cause he is good at making you do that.

As a bonus here are some email blasts that I get from Matt, including his colorful comments (in bold, and he does not need to apologize about and has told me I can run whenever I want) about such articles/information;

–oh, yeah, football is so much safer than in the past, right, Roger? right, Scott Hallenbeck? Merrill? Grandpa?… ya know, ol’ Teddy Roosevelt back there, he sure ended football barbarity? whew, I’m so glad… yea, typical for football yak, ol’ TR was about talking big but carrying a soft stick…  excellent report by ABC with assist from our guys at WWL:

“Despite improvements in technology and equipment and modifications to rules in the game on both the pro and amateur level, there’s just a rougher style of play now than in the past,” said Dr. Jaime Levine, the medical director of brain injury rehabilitation with the Rusk Institute in New York.

“Size and physical conditioning techniques in sports at all levels have evolved to create an intense athlete,” she said. “They’re able to create more force, power and speed than ever before and that leads to harder hits and a greater number of hits.”

—I like this text in wake of CTE finding for Seau:
This isn’t an argument calling for the extinction of football. It is the country’s most exciting and uniting spectator sport, and one that will endure regardless of what science reveals. No, this is a cry for everyone to recognize football for what it truly is — a game no less risky than helmetless boxing or freestyle motocross. …

The common contention is that athletes “know the risk going in.” In reality, that argument is toothpick-thin.

Most football careers start in high school, and teenagers don’t care about the risks. And even if they do become more wary of them in time, how many are going to turn down a scholarship or an NFL contract if such an offer comes along?

Unlike boxing or big-air skateboarding, where the dangers are so clear that they attract only the most brazen, football’s perils often don invisibility cloaks. The sub-concussive hits on the line? The constant banging in practice each week? Players may not notice a thing when they go to bed that night, but they will assuredly notice when they can’t get out of bed 15 years later.

Then again, we knew this already. Football’s ties to brain damage have been reviewed, repeated and regurgitated for years. They have proven themselves as triggers to depression, despair and death — yet somehow, the national response has been delusion. …

A couple of months ago, HBO boxing commentator Jim Lampley cried when thinking about the various ring deaths he’d covered throughout his career. He then justified boxing by saying that it provided integration and economic opportunities for people who would otherwise have none.

Whether it is camaraderie, discipline, scholarships or livelihoods, there is no denying that football can benefit athlete and spectator alike. But we need to stop pretending it’s something other than what it is.

Anyone who thinks this is just another game — a healthy competition that doesn’t seriously diminish quality of life — well, they might need their brains examined, too.

They are coming in starting about age 9, when the more competitive nature kicks in combined with increasing size and strength, Wong said.

Young concussion patients are being seen for headaches and dizziness. They can be affected by light and loud noise. Some are unable to focus as well as they used to, she added. They suffer from general “spaciness.”

But the behavioral changes may be more alarming. In some cases, personalities have changed, she said.

“I have a couple patients of my own who are totally different people,” she said. “They are still the same person, but you can tell they are not as engaged. Sometimes they are not as social. They prefer to be by themselves, whereas before they were very bubbly.”

“I’ve seen A students become C students,” she continued. One bright student bound for private college suffered multiple head injuries from snowboarding and saw her grades drop off, she said.

General coping skills for these youngsters can disappear, Wong said. …

Personality changes have not been a permanent condition in her young patients, she said. But it has in others.

“We think it’s (dependent) on the number of injuries they suffer and the severity of the injury,” she said.

The study of concussions and their long-term effects is still in the early stages. The increase of suicides of professional athletes from collision sports — including football, hockey, mixed martial arts and even professional wrestling — has spurred research, such as what was conducted on Seau’s brain.

“We believe that it’s probably going to be cumulative when the research is finished,” Wong said. “But right now we’re still very much in the infancy stage in terms of research in the young groups especially in teenagers and even college age group. How many hits, or how hard a hit does it take (to cause serious or permanent injury) we just don’t know.”

–want to reintroduce Dr. Weil in Chicago, of the email group now, with his recent comments on Griffin and much more for national radio late-night; great stuff:  http://sportsdoctorradio.com/redeye.mp3

–what an idiot…
–what an effing idiot, this hack:
Finally, training coaches and coaching players in techniques that are safer and lead to fewer head injuries is another area that shows promise. Coaching players at every level, starting in youth football, not to lead with the head or hit the opponent’s head when tackling, for instance, has already begun. There are numerous additional techniques that may be developed in the near future.
Despite the numerous league- and player-inspired areas that offer promising approaches to the NFL’s brain injury problem, some on the left will continue to call for governmental action to control–and possibly eliminate–the game.

The point being made by the above blasts is simple, if you have an opinion you are allowed to share it.  Some say honey gets more flies than vinegar, which is true, but if we don’t hear ideas from others how in the world can we shape a future for everyone?
Matt Chaney is a writer, editor, teacher and restaurant worker living in Missouri, USA. He earned a bachelor’s degree in journalism at Southeast Missouri State University in 1985, where he played football and coached as a student assistant. His 2001 graduate thesis study for an MA degree at the University of Central Missouri was qualitative media analysis of 466 football reports, historical print coverage of anabolic steroids and HGH in American football, based on electronic search among thousands of news texts from the 1970s through 1999. For more information, including contact numbers and Chaney’s 2009 book, Spiral of Denial: Muscle Doping in American Football, visit the homepage at http://www.fourwallspublishing.com.
EDITORS NOTE:  This last picture is awesome!!!  Check out my man Chaney rockin’ the Bike Coaches Shorts!!!  Matt you keep doing what your doing!!! 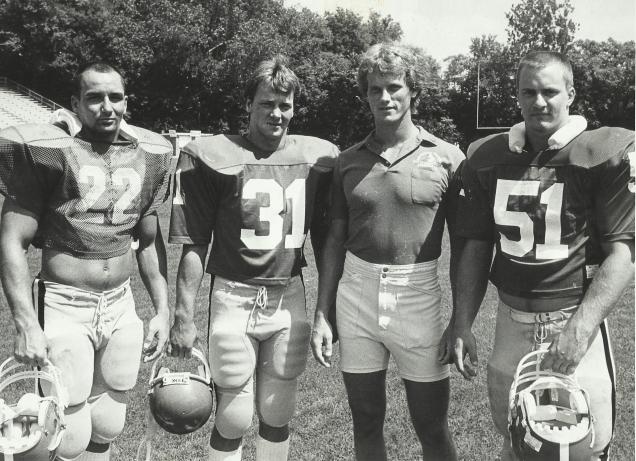