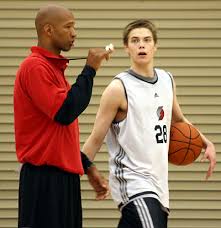 While traveling abroad you tend to miss a few things in American sports.  Take for example I missed all college football games and only caught snip-its of NFL action yesterday.  Even more easily missed are stories that are not “front page” news, take for example a professional basketball coach opening mouth and inserting foot;

“When you’re dealing with the brain, I guess what’s happening in football has impacted everybody,” Williams said before the game. “He got touched up a little bit last night. That happens a lot in basketball. It’s just that now they treat everybody like they have white gloves and pink drawers and it’s getting old. It’s just the way the league is now.”

“It’s a man’s game,” Williams said. “They’re treating these guys like they’re 5 years old. He desperately wanted to come, but he couldn’t make it.”

Anthony Davis was hit in the head via friendly fire as teammate Austin Rivers delivered a blow.  Actually if you look at the anecdotal evidence if the NBA players were treated like 5 year old’s he would have been right back on the court.  The NBA and the professional level is trying to set precedence for the youth to follow.

“I’m not saying I don’t like (the policy),” Williams said. “We’ve got to protect the players, but I think the players should have more say so in how they feel. I’m sure I had four or five concussions when I played, and it didn’t bother me. The NBA is doing what’s necessary to protect the players, but this is not the NFL. You don’t get hit in the head that much. I understand it. But as a coach, I’m a baby about it. I want my guys ready to play. That’s basically the bottom line; I’m just a baby.”

I know they are all strong statements toward these comments but this MUST stop at the highest level if there is going to be any impact at the lower level.  There was one thing clear from Zurich; not everyone has the proper information and there are some places, sports, communities and regions around this world that are behind the times.  Certainly I would not have guessed this to be the case with the NBA.

Interestingly enough the topic of flying after a concussion came up at the conference.  The consensus was not met on that, but there was interesting statements, such as winter sports athletes under the care of Canadian doctors have a graduated return to physical activity at altitude.  The other topic in this matte was the pressurization of the cabin while flying.

Everyone must remember that part of the “rest” portion of concussion management included reduction of stress and external stimuli, and flying could be both for many people, just my .02.