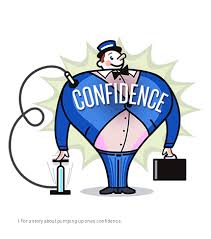 Confidence, arrogance, or indifference. It doesn’t matter which term you use, as long as you understand what it means to show any  of those characteristics. The popular conception is that confidence encapsulates valuing yourself, being proud of what you’ve accomplished and ‘standing up for yourself’. The unfortunate circumstance is that the word ‘confidence’ (as used in the phrase, ‘Have confidence in yourself’) appears to have been corrupted and used to connote an arrogant, narcissistic attitude. People who have been affected by brain injury, or any other health condition that has had detrimental effects on self esteem, are encouraged to  show confidence, with the hope that they will feel good about themselves when they go out into society. This is well-meaning, but perhaps, not the best way to go about instilling true confidence.

Confidence is defined by the Oxford Dictionary as: the feeling or belief that one can have faith in or rely on someone or something; the state of feeling certain about the truth of something; a feeling of self-assurance arising from an appreciation of one’s own abilities or qualities.

That is what confidence means. What’s often impressed on people – recovering from brain injury or not – is that confidence includes its fair share of arrogance and narcissism as well. There’s a difference between being confident and just being an idiot. To me, confidence, particularly self-confidence, includes having restraint when appropriate and knowing what is important to you. In turn that reduces panic. The footage of people knocking each other down and trampling on others in order to get a sought after toy for Christmas, a new phone or a new book, does not show a mass of individuals with confidence, it shows a bunch of people panicking. Likewise – albeit on a smaller scale – when somebody jumps in front of a coffee line, then says that they’re “really busy”, “in a hurry” or “already late”, what many perceive at that time as confidence, is simply panic. We shouldn’t confuse the two. As a side note, that’s why the world economy is messed up and it’s why many world leaders make dumb choices. They don’t have confidence in their ability to lead, but they know panic when they see it and they know how to exploit it.

I could go on, but my point is that confidence is not something that needs to be shown blatantly to everybody, it’s something that requires calm and self-evaluation. Before my brain injury I had reasons to be confident, and I was, to an extent, but perhaps not entirely. I would certainly say that I wasn’t as confident as I am now. Before August 1, 2003 (my cycling accident and subsequent brain injury) I was confident academically in my master’s program, I was confident in my swimming and water polo playing, I was confident in my cycling (I was getting more confident in my running, but I didn’t like it). When I woke from my coma, I had lost all of that. Luckily – maybe morbidly lucky, but lucky nonetheless – I didn’t really know or appreciate the seriousness of my injury until I was doing rehabilitation and, thanks to my therapists, I was feeling pretty good about myself. Since that time, when working and being out with different people, I get frustrated, to varying degrees, with my current inability to do many of the things I used to. My rehabilitation therapists, notably my physio Jen, cemented in me a firm belief that even now, 9 years since my brain injury, I can still make real and noticeable improvements and I will someday play the sports I love. As long as I believe I can and will draw closer to that goal, time is less of an issue.

When I was struggling with daily tasks soon after my brain injury, people would often tell me “don’t get frustrated.” Don’t get frustrated? Of course I was frustrated! Of course it’s annoying (to say the least)! The important thing I learned is that getting frustrated is fine. It’s natural. What’s not fine is giving up. The same is true of confidence. In December 2003, I took 2 or 3 small shaky steps, my first unassisted steps since August. I had no confidence in my walking. I had no confidence when, in June 2004, I went to Toronto and had to rely on my friends for almost every step I took. Of course it’s frustrating! Of course it’s annoying! I’m not yet running around jumping fences, but my confidence in that part of my recovery has certainly grown. I mentioned indifference at the beginning, but I do not mean general indifference, I’m referring to a sort of cocky indifference in which you feel neither one way or the other as to how things are presently going because you recognize that ups and downs are inevitable during recovery and as long as you stick with the effort, things will improve. There is no panic.

One thought on “Call it what you want, just don’t panic”