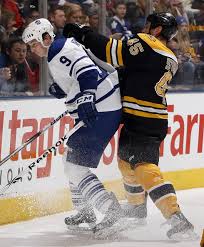 One of the largest hurdles in concussion identification and then management is full disclosure by the athlete.  The urge to play and not admit “weakness” lead many to hide the symptoms.  Take Colby Armstrong from the Toronto Maple Leafs for example;

The Toronto Maple Leafs didn’t have a chance to follow any of the guidelines set out in the NHL’s concussion protocol because they were unaware the forward was even experiencing symptoms until almost 48 hours after the collision that caused them.

Armstrong was injured Saturday night against Vancouver, but didn’t let the team’s medical staff know he was feeling nauseous until Monday afternoon.

“It took us all by complete shock because we had no idea that he had his bell rung the other night,” Maple Leafs head coach Ron Wilson said Monday night after a 3-2 shootout loss to Los Angeles.

This shows that awareness and education are very important.  This falls on those that are in charge of athletes, granted if a player is going to like he/she is going to lie.  However, the more we stop making this injury mysterious the more truthful individuals will be.

Continuing coverage now of the fight involving Penn State Quarterback Matt McGloin as his availability for the Ticket City Bowl on January 2 is still questionable after he suffered a concussion and seizure in a locker room scuffle with Wide Receiver Curtis Drake.

Getting punched in the face will certainly elicit a concussive episode if hit hard enough, not a good way to go out.