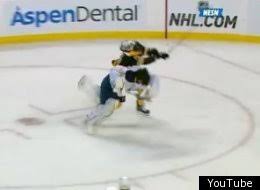 I was at the game in Boston on Saturday, November 12, 2011, so I saw the play in which Milan Lucic crushed goalie Ryan Miller. Immediately there was a quick groan in the crowd around me. My friends know the seriousness of major strikes to the head better than most people, so they could see how bad the hit was and how much it could affect Miller.

After the immediate shock of the hit, the crowd went crazy. There was long and sustained loud cheering for Lucic and jeering of the Buffalo players for their reaction. There was also intense booing of the 2 minute penalty assigned to Lucic for the hit. This was followed by equally intense cheering as Milan Lucic was celebrated in a video shown on the scoreboard screen, profiling his big hits and physical style of play. It seemed the fans couldn’t be prouder. Of course, there is a whole separate debate among hockey players and media about goalies being able to play a puck outside of their respective, claustrophobic creases.

The referees didn’t assign a larger penalty because they could see no immediate injury and considering how they are allowed to penalize during a game, that actually seems kind of fair. Not long into the Sabres 2 minute power play, a Bruins was tripped when a Buffalo player’s stick was caught in a mess of skates, resulting in a 2 minute Buffalo penalty. Again, that penalty is fair.

My question is: Are penalties in hockey meant to penalize a team for gaining an unfair advantage in play (tripping) or are penalties meant to punish players for disobeying the rules of the game? Even after having days in which to analyze the video, the NHL, in an incredibly ignorant decision with no thought to how it would be interpreted, didn’t give Lucic a suspension. It was fairly obvious that he had no intention of avoiding a collision with a much smaller, and stationary Miller, but intent is not what’s important in this case.

In hockey, the refs are really busy; constantly moving, avoiding players, avoiding the puck, all the while following the play (often moving at top speed to do so) to ensure rules of the game are obeyed. After all of that, the most reasonable thing they can be asked to do is penalize a team for gaining an unfair advantage and the most they can reasonably assess is the current state of players in action, so however easy it is for me, the commentators in the above video or others watching to say that it should be a hefty penalty, we have the luxury of an unimpeded view of the entire field of play.

You would think that the NHL, with the same luxury of viewing as fans and commentators would be able to assess punishment better once all of the injury information is available. If the NHL agrees with the refs decision of a two-minute minor penalty then they can give them a passing grade when they review referees. If, however, they would like their players to avoid brain injuries, they could quite easily take action given the information now available. They have now put forward, at the GM meeting, that goalies are not to be hit. As if Miller being a goalie was the only reason that hit was dangerous. So, in essence, they’re saying, “our bad, we didn’t make it clear, don’t hit goalies.” Or, they could say, “Lucic, you know how you flew down the ice at top speed and slammed into Buffalo’s goalie, giving him a concussion? Don’t do that anymore! You’re suspended.” Lucic, “I didn’t know he would get a concussion and I didn’t mean to do that.” NHL, “Well, tough. We’re basically saying don’t barrel top speed at goalies who are in their own end, stationary, attempting to play the puck with their oversized stick that isn’t designed for accurate or precise stickhandling.” In fairness to the NHL, it’s difficult to say all of that while their head is buried in the sand.

2 thoughts on “Lucic hit on Miller: Penalize or Punish?”