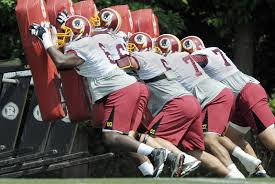 If you take out the anomaly of Week 8 the NFL has been very consistent since the beginning of the year.  If that were the “true” case we would be observing a very static rate of concussion per week this season.  Two “new” developments: 1) the addition of two separate concussion to the Injury List that occurred in practice, in the past two weeks there has been three. 2) offensive lineman concussions, by percentage, have almost doubled since last year.

I am however finding it difficult to confirm if concussions have happened during special teams action.  As of now we have three confirmed (2 on punt) and one suspected.  If this is again a “true” set of numbers it would seem that the rule changes have been effective in reducing concussions.

I will no longer bore you with aimless rambling so here are the Regular Season stats (126 Since Camp Began);

NOTES: Currently there is a decrease of concussions from last year at just under 4%…  Average reported concussions/team is 2.8…  It is becoming very peculiar that teams have yet to report a regular season concussion and very strange that two teams continue to have zero since camp opened (MIA and CIN)…