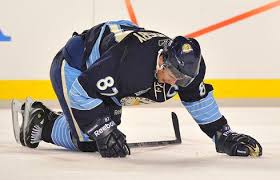 The NHL was very proactive with protection of its players; tightening down Rule 48 and installing Brendan Shanahan as “Hit Czar” before the season began.  All of this was done in an attempt to keep players safe and avoid a repeat of the Sidney Crosby affair.  With noble intentions put forth by the league, the only way to measure its effectiveness is to compare head injuries from years past.  Unfortunately as we have described in the weekly introduction; many teams used alternate terms (“undisclosed/upper body) to hide/minimize head injuries, for what its worth they still do however it seems less to this observer.

The Concussion Blog attempted to track concussion/head injuries last year, and we believe that we were the only source for this information for the 2010-2011 season.  Although imperfect it gave a “baseline” for us to measure the rule changes installed this year.

After roughly 15 games for each team we can now make a solid observation;

We would like to caution that it is still early in the season, but this early return is very encouraging and if this were to hold steady there would be roughly 22 less incidents than last year.  Here are some statistics (based on 15 games for each team);