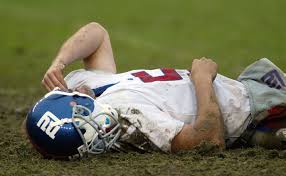 Last week was void of the “big incident” like Week 2 and Mike Vick.  There was another quarterback who sustained a concussion, Kerry Collins, was removed from the Sunday Night game and evaluated for a concussion.  That is now two weeks in a row that Al Michaels and Cris Collinsworth have had the opportunity to expose and educate the viewers about concussions (with limited results).

The reporting of the injuries during the games is becoming  a bit better as 45% of the reported concussions this week were identified prior to the NFL’s Official Injury Report coming out Wednesday.  We also have BREAKING NEWS about concussions in the NFL; the Tampa Bay Buccaneers had their first reported concussion since the beginning of last year, as Geno Hayes was reported to have a head injury.