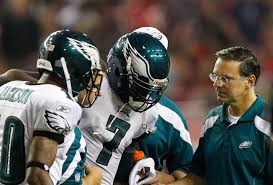 Later in the drive, not only did Jeremy Maclin return to the game after the hit from Robinson (and being “down”), he caught a pass from Vick, but behind the play Vick was injured.  As you can see in this video Vick’s head was hit by his offensive lineman initially rotating it then the force of Vick going down caused Vick’s head to “whip” back.  In this video we can see a dynamic rotational and deceleration of the head, leading to him being observed as groggy and “off” from the broadcast.

With the NFL trumpeting more awareness about concussions including how you can sustain one along with the SIGNS and symptoms of a concussion, one would think that the announcers would be aware as well.  Guess not, as there was nothing from the booth regarding his possible head injury, they only mentioned something when cameras caught Vick spitting out blood.

As he sat on the sideline, Twitter exploded with keen observers, trying to figure out why NO ONE was stating the OBVIOUS, in this case he had sustained an injury to his head;

It was, in my opinion, erroneously reported that Vick had a “neck” injury off the bat.  As you can see from a sampling of the tweets about this situation the facade was not working.  What became even more troubling was the comments that started about the announcers.  We understand they are not medical professionals but they do comment on obvious orthopedic injuries – if an ankle gets twisted announcers are quick to point that out – why the obvious aversion to noting that player X has hurt his head?  Heck we ran a story from another blogger about this problem.  @breezee05 was on fire with this issue as he made two tweets regarding this;

And @KMeyerATC had this to say;

This is EXACTLY where the communication breaks down.  The NFL wants more awareness and education but when that happens, those that choose to learn often see the hypocrisy of this particular injury.  We all see something we have been told to look for and then are told something different.  In the case of Vick, he was not exactly steady leaving the field with assistance and appeared “dazed” as he sat on the bench after sustaining a blow to the head then left the field with a “neck injury”.  Do the announcers have the authority to discuss a particular injury, probably not, but if a situation like this arises why can they not talk about concussions in the general sense and explain what the NFL is doing about it.  The easy answer to this is that announcers do not want to make a team look bad by not doing what has been suggested of them, so they will not mention it.  Regardless people listen to the announcers, people yearn for information about injuries, why not be proactive?

How did we come to the conclusion that is was a debacle?  Because the coach had the cajones to be honest and use the scary “C” word; as Andy Reid confirmed what the twitterverse had been suspecting, Mike Vick had a concussion.  Not only did he avoid terms like “ding” (as Trent Dilfer on ESPN) or “mild” he stated it as it should be an injury.  It was very comforting to see an NFL employee and announcer take it a step further with this tweet;

Although the semantics from Rich Eisen may be a bit off (the brain does not have to make contact with the skull), the effort and purpose of the tweet is LOUD AND CLEAR, thank you Mr. Eisen.

This brings me to the point of this blog and post…

The injury of concussion is not the major problem, sure IT IS A BRAIN INJURY, but just like breaking a bone or tearing a ligament a concussion is an inherent risk of sports and life in general.  The ELEPHANT IN THE ROOM, is the horrid mismanagement of the injury, from recognition, assessment, management and recovery.

Everyone stop acting like the word “concussion” will ruin your life, IT WILL NOT IN ALMOST ALL CASES.  What will cause harm in the near and long-term is the improper management of the injury.

P.S. I would like to prevent any of the mouth gear companies from trying to say one of their products would have helped with this statement I made on twitter;