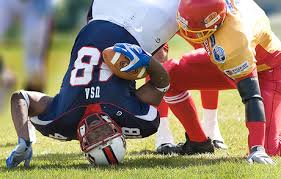 Some of the most important posts will be re-published from time to time.  This one was published January 2 and May 12.

Hogwash!  There is NOTHING mild about a concussion, period.  However media, teams, players and even medical staffs continue to use this nomenclature with this injury.  It is simply counterproductive to label this injury with a “mild” tag, and hampers the effort of everyone trying to increase awareness.

“prognosis of the injury is mild”, in terms of being sidelined.  The first may be correct the second is a slap in the face of those that study and deal with concussions on a daily basis.  So the symptoms are mild; no headache, slight vision issues, just “foggy”…  SO WHAT!!!  The insult to the brain that occurred has created a problem, a problem that we currently in the medical field cannot “fix”, not with tape, pharmaceuticals, or surgery.  And anyone that has ever dealt with a concussion or handles them in a management role (this guy) knows that traumatic brain injuries do not recover at a pre-set rate.  It is not a broken bone that will heal in 4-6 weeks, we are talking about the brain.  A frontier that both research and education have not even scratched the surface on.  For everything we know about the human brain there are about 1,000 things we have no clue of, making this injury much more than “mild” in any form.  Counterproductive.

Others say may say “everyone understands mild is about the symptoms”, um WRONG.  Being in a high school setting we deal with parents all the time and when a player is concussed there are a lot of instances where the parent will say “It’s just a mild concussion, right?”  ARGHHHH.  Then I have to spend the next 10 minutes telling the parent why, even though his/her kid feels “OK”, that this is a problem that we must stay on top of.  My other favorite is “Well ‘insert NFL’er here’ had a concussion and was out only 3 days, his was mild, may son/daughter doesn’t have a headache only has problem with loud noises/bright lights.”  ARGHHHH again!  Using terms that diminish what is actually happening with the injury makes the job a lot harder.  Constantly dealing with the stigma of “bell rung” is one thing but dealing with expectations due to a simple term of “mild” is outright maddening.  If we all remember Sidney Crosby was listed as a mild concussion as well; he missed five months.

Finally the term “mild” also has connotations of ease, when it comes to recovery.  As mentioned above concussion recovery is very dynamic, and as I have posted before, instead of a liner recovery it is more like a sinus wave.  Those dealing with concussions will have good days and bad days then great days and feel recovered only to be back to about “square 3″ after a stressful day at school/work.  The 3rd International Conference on Concussions in Sport dismissed and took out the terms “simple” and “complex” when describing this injury, just for that reason alone.

For the sake of confusion and simplicity why don’t we all just use the term “concussion” for now.  I do believe that Traumatic Brain Injury is more descriptive, and a post for another day.  If you know of someone who is concussed and were told it was “mild” let them know that is not the case for most.  Then find the MD/DO, health care provider that told them that and forward this post to them.  It is one word, carries along with it a certain level of seriousness and along with current educational efforts means more now than every before.  Putting the tag of “mild” on it only makes all efforts in vain.