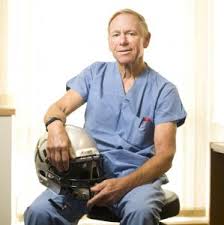 On this blog we have been presenting information that has led to me and others saying that intentional contact to the head of adolescents is not good for long-term health.  What has not happened until recently is a “big name” in the research/medical world suggest that collision sports are inherently dangerous enough to warrant us to re-think our practices.

At the end of August the American Academy of Pediatrics announced that kids should not be boxing for the risk associated with concussions (number one injury in boxing).  That was quickly shunned by the boxing world and even the prominent Dr. Robert Cantu said there could be a social impact that should be realized.  Dr. Cantu stopped short of admonishing the decision as well as supporting the decision (in the related article).  However, the announcement was not unexpected if you have been paying attention, more as more problems are being found with brain injury.

I have clearly stated that I will have no problem with my children playing collision sports, only when they are older and in high school.  I want nothing more than for my sons to play football (if they choose), but at what risk?  Sure “back in the day” kids were getting their “clocks cleaned”, then subsequently grabbing some “smelling salts” and returning to the game, heck I was one of those.  As they and me have aged things have changed, not just in research, but in my (most likely others) well-being and personality.  These issues were commonly associated with environmental or social changes; are we sure there wasn’t an underlying mechanical/chemical issue in the brain driving this problem that is a result from repetitive brain injuries?

Dr. Robert Cantu, believes this could be the case and has clearly stated, in an interview with the media reported here by WCVB, that contact sports should be avoided until later in life, age 14 to be specific;

“We’re going to be recommending that nobody under the age of 14 be involved in collision sports,” said Dr. Robert Cantu, chairman of the Department of Surgery at Emerson Hospital and co-director of the Center for the Study of Traumatic Encephalopathy at the Boston University School of Medicine. He also is co-director of the Neurologic Sports Injury Center at Brigham and Women’s Hospital.

Dr. Cantu has been on the forefront of concussions since the 80’s when he developed some of the first return to play (RTP) protocols and grading systems.  He has not only led the way but has reassessed the information constantly and steered the medical and sports community with changes; removal of grading system and eliminating his RTP guidelines.

When Dr. Cantu speaks people listen or SHOULD be listening.  When I was at the New Jersey Concussion Summit I hung on every word he was saying and when he made the comment about collision sport and kids younger than high school (summarized by me in the live blog) it signaled this recent move;

Cantu – opinion; there is no need for anyone younger than high school level to subject to head trauma, i.e. collision sports.  There will be a modification to sports in future.  Take checking out of hockey, flag football at younger ages.  He realizes that it wont change today or be popular.

The statement from Dr. Cantu made in the media even caught the outspoken Matt Chaney off guard, “a bombshell for the issue of brain trauma in American football, Dr. Cantu just won my admiration (and) respect.”  Although it is one thing to make statements, it is just a first step as we will have to make uncomfortable changes with the support of bigger entities as Chaney finished his comment, “we’ll see if NFL heads like Goodell back him up.”

It is not just the NFL that will have to back this up, it is the COUNTLESS youth leagues in collision sports: American Football, Australian Rules Football, Rugby, Boxing/MMA, Rugby, Rodeo, Ice Hockey and Lacrosse.  For a more specific definition the American Academy of Pediatrics issued a policy statement in 2001 (updated in 2008) about sports classification;

Sports are categorized by their probability for collision or contact in Table 1. In “collision” sports (eg, boxing,ice hockey, football, and rodeo), athletes purposely hit or collide with each other or inanimate objects, including the ground, with great force. In “contact” sports (eg, basketball and soccer),athletes routinely make contact with each other or inanimate objects but usually with less force than in collision sports. Table 1 does not separate collision and contact sports, because there is no clear dividing line between them. In “limited-contact” sports(eg, softball and squash), contact with other athletes or inanimate objects is infrequent or inadvertent.

Some limited-contact sports (eg, downhill skiing and gymnastics) can be as dangerous as contact or collision sports. Even in non-contact sports, such as power lifting, serious injuries can occur. Overuse injuries are not related to contact or collision.For these reasons, the categorization of sports in Table 1 insufficiently reflects the relative risks of injury.1 The categorization, however, gives an idea of the comparative likelihood that participation in different sports will result in acute traumatic injuries resulting from blows to the body.

As Dr. Cantu opined and I have written these changes will not be popular, it is tearing at the fabric of sports, but he feels they are necessary changes.  The countless speaking engagements I have given when this question is asked I respond similar to what Dr. Cantu has said, but I can only control my kids and family.  It boils down to the possibility that the brain can only sustain a “certain” amount of total force before it starts to create great damage;

Testing has shown that teenagers who played contact sports often already showed signs of chronic traumatic encephalopathy, or CTE, a degenerative brain disease caused by multiple blows to the head.

“The young brains are more vulnerable, they’re less myelinated, the necks are weaker, the heads are bigger proportionately so the forces that accelerate the brain need not be as high to produce higher accelerations,” Cantu said.That means concussions can happen even with minor hits and cause more damage than the same injury to an older player.

“It’s not just concussions,” Cantu said. “In fact, we’ve had a number in our center who have had no recognized concussions at all, so it’s total brain trauma. We have millions of youngsters putting their heads into collision sports right now and we don’t really know how safe this is for them.”

It is going to be a “personal” decision made by those that control the consent for adolescents, the parents/guardians.  Before there was legislation for seat belts in cars, parents had to make the same decision for their children.  Perhaps we will find out the “silliness” of putting your child in a car seat or restraint will be similar to not allowing the kids play collision sports.  If you are unfamiliar with this analogy ask your parents (if you are older than 30) how you came home from the hospital – I bet a majority of you came home in the arms of your mom, while she sat in the front seat, without a seat belt on herself.

I am not advocating legislation to remove collision sports for the youth, if the demand is there it will continue to be present – some still drive without seat belts – I think everyone that has kids in sports, or soon will, should take a risk-assessment approach.  Dr. Cantu also explained this in the media;

“If one is ultimately going to be superior in a sport, it’s their genes that are going to determine that, plus their work ethic. It’s not going to be that they started the sport earlier.”

11 thoughts on “No Collision Sports For Kids Under 14”