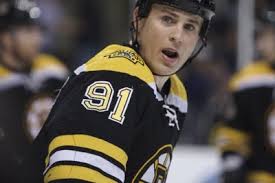 I was brain injured in 2003 while cycling in Victoria, BC. Concussions are also known as mild traumatic brain injuries and while what I sustained was a coma-inducing severe traumatic brain injury, from what I hear, and what makes sense to me, there seem to be many overlapping symptoms. I read about how Marc Savard has “post-concussion” symptoms and I’m really wondering why they call them post-concussion symptoms and why I always say ‘I was brain injured’. I guess the major traumatic blow to my head  is a thing of the past, so, on a technicality, I can get away with saying “was brain injured”, but plain logic is enough to tell you that you don’t have symptoms from an injury that doesn’t exist. I still have major symptoms and even though you can’t see my injury just by looking at me today, doesn’t mean that my brain has completely healed. Some parts of my brain seem unaffected, but obviously, some parts are still affected. My brain injury is not a thing of the past, my brain is still injured, or at least changed enough from what it was, so as to make the distinction meaningless. My problem with double vision and balance are obvious to people who know me, but I have symptoms that, from what I’ve read, many with concussions experience as well.

From a non-medical point of view, I think saying someone has “post-concussion symptoms” is a misnomer. The hit is not the concussion, the injury to the person’s brain is the concussion. If ‘John’ was knocked down, landed hard, broke his leg and was using crutches, it wouldn’t be said that John has post-broken leg symptoms, it would be said that John’s leg is broken. So why say “post-concussion symptoms”? Saying you are or were brain injured has such a negative connotation that it’s easy to for me to understand. Not long ago, when someone asked, I would try to avoid saying it, now I try to make sure I tell people that I was brain injured – not gloss over it – but I still tend to be reticent about the severity of my injury (but not all the time).

I mentioned some of my more major symptoms; double vision and balance issues (the amount to which they are intertwined is a difficult issue to resolve, since I’ve never had one without the other); but I think some of the other daily issues I face are some that people who have concussions face as well. When I stand up after I’ve been sitting down for a while (probably 20min or more), I’ve got to take a second to re-orient myself. This is usually very quick and it probably has a lot to do with my balance issue, but I feel it predominately in my head – not dizzy or spinning, just needing literally a second to get re-adjusted. If I’ve been lying down, I need more time and that’s when dizziness can kick in for a few seconds. It really helps if I go from lying down to sitting up and then take a second when I stand. It sounds basic enough and it only takes a couple of seconds, but it’s something I do with more of a conscious effort.

Quickly turning my head when I’m lying, sitting or standing can often cause a second or two of dizziness. Not enough to knock me off my feet or anything, but enough that I notice and am bothered by it. The most intense moment of dizziness I seem to get is when I’m sitting up and I feel the need to push my arms up over my head and stretch them up and stretch my body (usually in the morning sometime). It’s a stretch that everyone does (brain injured or not) in the morning (usually standing, right after they get up). I’ve done it standing next to my bed, but the dizziness it causes always knocks me back on my bed, so I also do it, usually mid-morning, sitting in a chair. Those ‘spins’ can last a few seconds and my head feels weird for a few more seconds after that too.

For some strange reason, I’ve never had to deal with headaches. I had one long, intense headache after the doctors replaced the bone flap in my skull that was removed to release pressure on my brain just after I was injured, but other than that, I seem to have avoided them (that said, my head doesn’t always feel 100%). Another important issue that I share with people with concussions is fatigue. It’s not something that’s easy to relate because it’s not like being sleepy or tired after a long day’s work. It’s also something I’ve – perhaps unwisely – ignored at times because I wanted to do something or go somewhere. I wrote a post in January about Sidney Crosby and his then-newly sustained concussion (check out the video). I wrote in that post that “To anyone who has had a concussion or another type of brain injury, his description makes sense” and unfortunately it’s a difficult feeling to convey. I like his description at 4:55 of the clip when he compares it to feeling a little sick (I took this to mean something like having a cold or flu, not stomach sick) or ‘off’. I think that’s about as apt a description as I can think of. Just like anybody in life, you don’t feel the same everyday, but this feeling is always lurking. You may not consciously feel ‘off’ that day, but it’s usually not far away. I’d like there to be a more universal description, but I don’t think one will ever exist because everybody’s brain is different; different thought processes, different neural pathways, it’s so complex that it’s extremely rare, if not impossible, for even two to be exactly the same.

The Boston Bruins should be commended and congratulated for understanding the issue and expecting Marc Savard to miss the entire season. It’s good to see this issue being addressed, at least for one player!