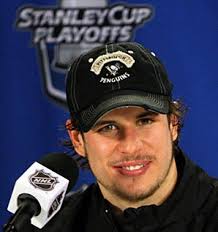 In roughly two and a half hours from now Sidney Crosby will be going on record with “something” regarding him and his career.  Speculation has been rampant with what he is going to say; from “hi” to “I am retiring”.  First of all, Crosby is 24 years old and has a bright future ahead of him, IN HOCKEY.  Secondly, he stands to make $16 million over the next two years, money makes the world go round.

Before we give our educated (and probably wrong) guesses as to what Sid The Kid will have to say let us review what happened and how this is not only a sport issue but a player issue, even Crosby can make mistakes;

After the initial hit on January 1st, Crosby should not have touched the ice until symptoms cleared.  Instead the machismo of hockey (and professional sports) did not allow him to give into pesky little annoyances.  Not only did he finish the game during the Winter Classic, he suited up and played a game while still dealing with an unresolved concussion.  He was effectively playing hurt, but as we all should know playing with a brain injury is not acceptable.  In the case of Crosby this became the nightmare the NHL did not need, a player rubbed out due to a concussion.  Oh, it’s not the first player and most likely will not be last, but he is the biggest star in a league that is looking for advertisers and eyes on the TV.  Because he was not in a cast or went under the knife for a concussion, it seemed as though the injury was trivial to announcers – even scoffed at by the likes of Don Cherry – and fans.

Sidney Crosby sustained a concussion on January 1 and continued to play with this injury and because of it when he was hit again in Tampa he compounded the original concussion.  He placed his life and career in peril by trying to be tough, ignoring the symptoms and minimizing a concussion.  Sidney was wrong, period.  His support group, if given information about the original concussion was wrong, period.  We may never know who knew what, when but what we do know is that Sidney knew, he had to know.

What exactly he is going to say may only be known by him, his family, his agent, and the Pittsburgh Penguins; the rest of us can only speculate/guess.  I feel that Crosby will tell the world that he has no definite timetable for return and due to the recurring symptoms at near peak exertional levels expecting a return before the end of the year may be a bit much.  I can see him planning a sabbatical this season to focus on full recovery before returning to the sport he loves.

I firmly believe that Sidney should take the opportunity to encourage the NHL to take head-shots out of the sport, emphasize the need for awareness and use himself as an example to the rest of the hockey world (kids included) what NOT TO DO.

All of us await with bated breath, Sidney Crosby do the right thing this time.