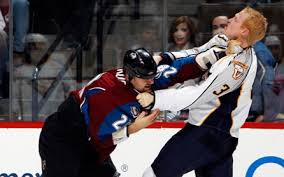 With the death (at his own hands) of Wade Belak that makes three total “hockey tough guys” that have ended their own lives this past summer.  At least one former NHL’er is saying its not a coincidence;

In the wake of Wade Belak’s suicide, retired heavyweight Georges Laraque doesn’t think it’s happenstance that three NHL players who made their living as fighters have shockingly died over the summer.

“A coincidence? No,” said the former Edmonton Oilers’ tough guy, who now is host of a sportstalk show in Montreal modelled after TSN’s Off The Record.

Laraque has been bowled over by the deaths of Derek Boogaard, Rick Rypien and now Wade Belak in the last few months.

It is almost impossible to connect any head injuries to the unfortunate demise of the players, but what is not impossible to gather is that these players have a very tough and demanding job.  After all the fights and hits these players do have a greater chance of impulse control issues that could lead to risky behaviors, like drugs.

Being ready to deal out and deliver head trauma on a nightly basis is something that many will never understand.  Does it have a place in the game, traditionalist (see Don Cherry) think so.  Even casual fans believe that the team should have an enforcer, a guy that plays within the rules to make another players job much more difficult.  However, fighting may bring unneeded injury to players. The act of fighting is a consensual action on the rink, usually, so I have no beef with it, any skater can take a dive.  Its the cheap shots and unannounced hits that are an issue in hockey, particularly to the head.

I am not a “hockey guy” but I do know that promising young individuals deserve a chance at a full and productive life once they have left the rink.