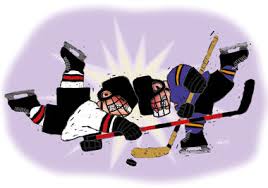 North America concussions are mainly focused on two sports: football and hockey.  Rightfully so as the youth level of these sports are ever growing so the impetus is on all of us to be aware of the injury and it’s proper management.  Sean Meister of Fox Sports ran a story about the work that has yet to be done in the NHL;

It’s worrisome when a player of Crosby’s importance continues to encounter symptoms eight months after the injury. Yes, Crosby is the face of the NHL in many respects. His injury is harmful to the league and is causing some headaches for the NHL brass. Fortunately for those in the NHL offices, they don’t have to suffer the same headaches as Crosby.

The reality is that Crosby is a 24-year-old with a serious injury to his brain. Nothing should take away from that scary reality.

Although Rule 48 was put in place, some modifications still need to be made in the NHL.  How about this change/update; NO CONTACT TO THE HEAD, PERIOD.  I am not  a “hockey guy” and have not played on ice, however that should not take away from the fact that the international sanctioning body of ice hockey prohibits contact to the head, as well as Hockey Canada.  If two of the biggest organizations of the sport have decided that this is necessary why does the NHL continue to avoid this move?

“It will change the game.”  “It’s the player’s responsibility to protect themselves.”  “That’s not how the game is played.”

Phooey to all of that above.  It seems to me that hockey has evolved into a very “gladiatoresque” sport where the bigger the hit the better the action.  Are the fans clamoring for it?  Probably at the beginning but seeing their “stars” disappear for a long time and some just plain burning out there has been a shift.

Back when the “Original Six” started the game was different, but the checking was still there, so was the fighting.  Hockey was a good game, with athletes now a days the game is faster and more high paced.  Can the game be as good if every player keeps his stick on the ice (except to shoot or pass)?  YES.  Will this lead to less head/brain injuries?  YES.

Somewhere along the line players began to respect their opponent a little less, the hits became bigger and more violent.  If the NHL wants to continue their perception of being proactive then the time is now to make a radical change, while leaving the sport unchanged.