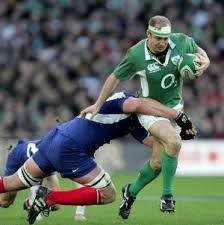 Players are not permitted to wear heavily-padded protection, which was being promoted by Australian back Berrick Barnes, who recently took time out of the game because of repeated concussions, but now hopes to play in this summer’s World Cup.

Biomechanics expert Dr Andrew McIntosh completed a study for the IRB and Australian Rules on the effectiveness of headgear in concussion prevention. His report showed the standard headgear approved by the IRB made no difference to concussion rates when compared with players who wore no headgear.

“I was struggling with cognitive tests and had been getting the symptoms for a while so I suppose I was at the high end of things,” Fogarty told The Irish Times last month. “When I got knocked out playing for Leinster against Treviso it didn’t take too much at all. It was a fella’s head that glanced off my face.”

For many years people have had the thought that without helmets sports like rugby did not have the affinity for head injuries, mainly due to players not using the equipment as weapons, and the feeling of safety inside the equipment.  The biggest flaw with that line of thinking is that you DO NOT HAVE TO BE HIT IN THE HEAD to sustain a concussion.

We will be keeping an eye on the international response to concussions as we go forward.