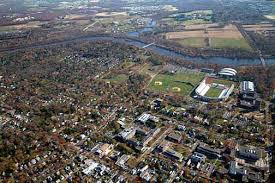 Welcome to the continually updated live feed from the Athletic Trainers Society of New Jersey 2nd Annual Concussion Summit.  I would like to thank the ATSNJ in particular; John Furtado, Eric Nussbaum, and Mary Jane Rogers for the help in getting things set up.  We are at the Wyndham Princeton Forrestal Conference Center & Hotel in a stunning amphitheater, attendance is anticipated to be high.  I anticipate updating this post as soon as possible after each speaker.  Follow @concussionblog for updates.

6:25am CST: Crowd flowing in with provided breakfast in hand.

7:07am CST: Margot Putukian, MD “In Office and Sideline Evaluation”  *She did an awesome job of battling through some AV issues!!

Awesome conversation with Kurt Kaiser, ATC of Hackettstown High School (@01keeper), regarding all the topics in the concussion realm, a continuation from our 3 plus hours from last night…  Dude knows his stuff…

Attendance from a rough count about 75-85 attendees, good turnout…

Wow, his billing was correct, a very good talk and made it very understandable for all.  I am very impressed with his information.

3. Is it appropriate to refer to concussions as “mild”?

The above questions manifested into a diverse discussion about the who and whats with the terming and clearing of concussions, including legislation.  Many examples from panel and attendees of issues surrounding the full understanding of concussions.  Each panelist emphasized that you should not “box” the injury into terms.  The general consensus was that education and communication is very important.  Dr. Putukian made a GREAT point about being proactive rather than reactive.

4.  Is there such a thing as “concussion rehab”?

Nussbaum – What about the blood test?

Audience – How many concussions are too many?

A very good panel discussion and was run very well and engaging.

Lunch was AWESOME…  Man they do it right here in NJ…

Side note: there is A LOT of talk about the Corpus Callosum in many of the presentations…  FWIW…

A very good interactive presentation, in light of being the last speaker of the day and being behind schedule.

I would like to first thank the ATSNJ for the event held today, the types of speakers and topics dynamic, but on the top of most peoples list of “must haves”.  Eric Nussbaum and John Furtado did a good job of keeping the conference on task and provided any resource or speaker needed to not only me but the entire audience.

Events like this are wonderful for the state and region and granted they seem to be popping up all over the place, but we need to as athletic trainers take advantage of such opportunities.  The access to some of the speakers and topics are difficult to procure, so if we as AT’s get the information we then in turn can take it to those that need it the most, the parents/coaches/kids/teachers.

I have now been to two top-notch “Summits” (Kentucky) in the past month, both of which provide a wealth of current and new information that all involved with concussions need to know.  I would also like to thank those that helped with the resources to get me out east.  If any other program would like me to blog about what you are doing feel free to send me an email.