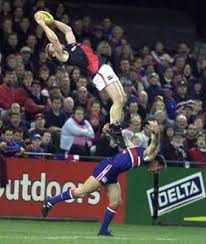 After some difficulty finding concussions down under, this week listings were much easier to find as two players were found along with two curious injury designations.  Let us begin with the interesting listings.

Last week I tweeted about Andrew Toovey and the hit he took; VIDEO HERE via AFL.  Seen in the video is Toovey taking a knee to the head as he was falling then his head bounced off the ground.  As he is taken off on a cart his neck was stabilized and it appeared that Toovey was out prior to that.  His injury is listed as “chest”, but we are going to list this as a concussion.

The other listing was not one we could see on a highlight film, but one that makes me think that the listing is a result of a/many concussions.  Simon Hogan of Geelong has been listed as out due to “depression”, it is unknown how long he has been out for but since depression can be a result of multiple head traumas we are going to list Hogan as well.

Two players were new to the list this week; Brent Stanton of Essendon and James Polkinghorne of Brisbane.  In an aside to the listings, Brisbane has three listed along with Geelong (one depression), but I believe that Brisbane is one of the few teams willing to let concussion information be known.

With these listings it brings the total to 15, through 8 rounds, just under 2/round.

Again if anyone has more information feel free to email us.