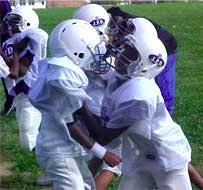 Over a ten-year career she surmises that a linebacker may sustain 15,000 sub-concussive hits; those hits that do affect the brain but do not produce instant symptoms consistent with a concussion.  That is fifteen THOUSAND hits, hits that are similar to a low-speed vehicle accident.  The forces being produced are doing some damage in the brain, and the collective damage is causing problems that linger later into life; such as CTE and ALS (Lou Gehrig’s Disease).  To completely discount a “professor/doctor” because they don’t know sports would be wrong in Dr. McKee’s case;

What McKee is not is against football. On the contrary, she’s been a fan since her childhood, as anyone would be who grew up in the 1960s in Appleton, Wis., down the highway from Green Bay. But she believes rules changes may be the only way to limit the number of injuries.

She even has a son that plays the sport, which she has encouraged to discontinue until later.  Dr. McKee suggests that “something” that should be done will be unpopular but if it means less incidences of these life altering diseases it cannot be a bad idea.  If football players are 8.8 times likely to develop ALS, and have a higher rate of Alzheimer’s, depression, anxiety then the general public the common denominator is the sport.

“This is a problem that is not going to be solved by (helmet) technology,” McKee said. “The helmet industry may improve, perhaps, conditions, but because the brain is floating inside your skull — and think of the skull as nature’s helmet — the helmet really protects the surface of the head. It doesn’t prevent that acceleration and deceleration that’s happening inside the skull.

“I don’t see that there’s any way of lowering the incidence of this without changing the way the game is played. I’m sure it’s going to be incredibly unpopular, but it’s going to have to be a game that maybe isn’t such a violent sport, that doesn’t have the thousands of sub-concussive hits that occur in every season.

“That’s what really distinguishes football from the rest of sports, the frequency of mild repetitive injuries. Maybe we change the type or number of practices, or maybe change the game entirely in a really unpopular way.”

She is not going out on a limb with this information, in fact more and more people are beginning to feel the same way.  You can include me as one of them.  I agree with her, wholeheartedly, that 10 year-old’s should not be playing tackle football, the problem comes down to popularity and money.  What age is the right age?  I don’t think we have a definitive number; I have even suggested previously that maybe high school should be the first time people are exposed to organized tackle football.

You can establish the fundamentals of the game, the offensive and defensive principles, subtle nuances, discipline and the love for the game by playing flag football leading up to that age.  Also, by the time they get to high school the coaching theoretically is better and more sound so teaching the techniques of tackling the proper way would not be met with horrible habits ingrained in younger players.  Not to mention body development is nearing its peak during the high school years for the majority of males, so making the fine adjustments needed to be successful are better made at that point in time, in my opinion.

But as McKee stated there are other factors that can be addressed, such as practices that include less hitting.  I have seen this starting to become more “en vogue” around where I work and from reports, but we have been working on making changes to reduce the number of days the players will sustain full-contact, where the sub-concussive blows can come from.

Our schedule is based on a typical Illinois high school “football week” and now it will look something like this (does not include the pre-season, still working on that);

This model is only applicable for varsity games, we are working to adjust hitting days for the other levels and for the players that play on both Friday and Monday.  This model also reduces our previous “full contact” days by two; which equates to 20 less days of full contact over a regular season.  How will effect the overall product that is on the field?  Unknown, but it will reduce the number of hits each player takes during the season.  Believe me, this was not popular with the coaching staff, but they must be given a big slap on the back for making the changes in this ever changing era of concussions.

One thought on “McKee: Unpopular Changes Needed In Football”