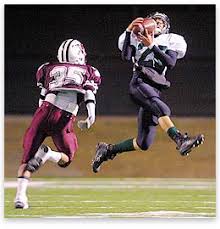 Appearing in Clinical Pediatrics this past month a study that looked at the injuries sustained in football that were ending up in hospital emergency departments.  During the season a sobering 2,000 adolescents are treated in the ED’s every day, that is every day.  Meaning kids aged 6-17 playing football will end up in the ED at some point during their career.

As they looked at the overall visits; Dr. Lara McKenzie and the research team from Nationwide Children’s Hospital also broke down the injuries with sprains/strains and fractures consisting of 59% of the problems.  Of course they did look at concussions and found that 8,631 reports each year;

“Prevention and treatment of concussions are the focus of many discussions at every level of play – from the junior level all the way up to the National Football League. Our data shows that young athletes are at risk for concussions,” said Dr. McKenzie, also a faculty member at The Ohio State University College of Medicine. “Every day during football season, an average of fifty-seven 6 to 17 year olds are treated in U.S. emergency departments for football-related concussions. The potential long-term consequences of this type of injury make this an unacceptably high number.”

57 is a very eye-opening number to see in the ED’s, and with what we know now how many are going unreported?

One thought on “Adolescent Injury Research”