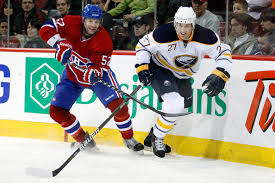 Throughout the year we have been chronicling concussions in the National Basketball Association and National Hockey League and now both sports are in the post season.  Obviously there have been more concussions in the NHL than the NBA but this time of year will lend itself to more “exposure” to the injuries sustained on the court or ice.  We will be noting those injuries that are both ACTUALLY listed and suspected.

The NHL on the other hand had 98 incidences of concussions or “concussion like symptoms”, so the chances of seeing these in the playoffs are pretty good.  In fact, based on the league stats we can expect to see one every game night (between all those playing).  However with the M.O. of the NHL finding all the concussions will be difficult; case-in-point Shaone Morrisonn of the Buffalo Sabres, I give you Exhibit 1;

The Sabres called up Persson from Portland on an emergency basis because Shaone Morrisonn has an upper-body injury. The Sabres are saying he is day to day but the injury is believed to be concussion-related after Morrisonn was crunched by Braydon Coburn during the third period of Game One.

Morrisonn was listed back in December with a concussion, this would be his second.

Joining Bickell in street clothes for Game 3 is forward Tomas Kopecky who left early in Game 1 after suffering a head injury. Both players were given “consideration,” according to Quenneville, as was center Dave Bolland.

Kopecky is coming of a concussion/head injury that was listed just a week ago, this possibly could be a Sidney Crosby type incident?

Nodl took a stick to the face early in Game 2, and came back for a shift or two, but then went out of the lineup for the remainder of the game. If Nodl can’t go Monday, NIk Zherdev seems to be the most likely replacement to play on a line with Mike Richards and Kris Versteeg – especially after practicing with them in earnest Friday.

If Nodl had been just lacerated, he is a hockey player and would have been back in the remainder of the game and not be listed as questionable for Game 3.

Ed Jovanovski does not have an Exhibit, but he was injured after being boarded in Game 2 and is listed as doubtful, we will list this one as suspicious.

Ian White of the San Jose Sharks has actually been listed as a “head” injury, it is amazing/shocking that one team will list such a thing.

All of the above players (minus Jovanovski) have been added to the list of concussions for the year in the NHL;