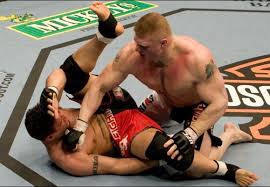 As highlighted by Morgan Campbell of TheStar.com the UFC has a policy in place, as explained by UFC Canada President Tom Wright;

When a fighter is knocked out in a UFC event he is immediately brought to hospital, where he undergoes either an MRI or a CT scan. In addition to commission-imposed suspensions, the UFC issues a parallel suspension, banning the fighter from contact drills in practice for at least 60 days and from competing for 90 days.

The question asked in the article is a good one; is this enough?  I will be honest, I don’t know what “enough” is for anyone, but the UFC publicized policy is far greater than anything else in sports, it even falls more in line with Benett Omalu, a leader in CTE research.  As Campbell also noted, daily evaluation and treatment when warranted is also needed, but again this is at a cost to the business.

What should be known is that the risks involved with repeatedly being pounded in the head are LIFE LASTING, and protecting those that choose to partake in these sports is a high priority.  You cannot fault the UFC or commissions that medically suspend pugilistic athletes, in fact they should be highlighted for doing what they currently are.

One thought on “Pugilistic Sports and Concussions”