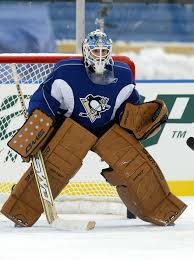 What a great question that Greg Wyshynski wrote about at Yahoo!

“They haven’t really thought through all of the situations. And I’ll give you an example: Let’s take a look at goalies. What is a concussion, first off? Here’s Jonas Hiller in the All-Star Game. Is he concussed? I don’t know. He played for two games and hasn’t played in a month. I guess he was.”

To take the guesswork out of it for Heals, the Anaheim Ducks and Hiller have both been adamant that he’s suffering from vertigo rather than a concussion.

Healy showed highlights of Curtis McElhinney and Henrik Lundqvist getting knocks to the noggin, and said the following about King Henrik:

“With the protocol, he reaches for his head, trainer Jim Ramsay comes on the ice. He’d have to go to the quiet room for 15 minutes and then decide hey, was he concussed. If this was Stanley Cup, Game 7, game tied 2-2, would you send that player to the room?”

The reaction of Healy and from the GMs is predictable. If it didn’t happen now, it would happen after a game in which a healthy player was “taken” from his team via this protocol. And losing a goalie in a critical game for a mandated 15 minutes is a tough one to take.

An absolute astute question to be answered by someone; goalies are in a position to take inherently more blows to the head that could result in symptoms and obvious sings warranting removal for evaluation.  What is should be not mistaken is that this protocol, right or wrong does address players trying to play though a head injury.  As we have seen with many research articles and anecdotal evidence the greater of two evils.