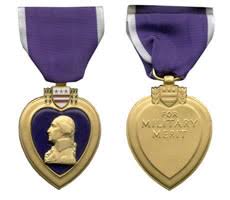 And it is about DANG time the military came around on this.  I say military but really the Army is taking the lead as they have recently reviewed their designations for the Purple Heart, and concussions will now be considered for the honor.  There is hope that the other branches will follow suit and make concussions worthy of a Purple Heart.

It wasn’t like the Army did this on their own, it took pressure from the civilian sector, namely the NPR;

In response to the ProPublica/NPR reporting, which showed that Army commanders denied some soldiers the Purple Heart even after they suffered documented concussions, the Army’s Chiarelli called for a review of the guidelines. On Wednesday, he announced clarified rules, including a checklist of valid treatments (bed rest and Tylenol among them), that will make it easier for war veterans to receive the Purple Heart after sustaining concussions.

I must say this is great news, because by making this distinction more awareness will be given to “closed head trauma” and making the ‘invisible’ injury more visible to everyone.  And I echo the sentiments of Nicole Brochu of the Sun-Sentinel when she writes this;

The point, Chiarelli made clear, was not just to generate a broader understanding that concussions do indeed count as serious war wounds – but to reduce the stigma about mental health problems. Only when that stigma is eased among Army personnel of all stripes will more soldiers will feel justified in seeking treatment. Only then can the Army can do a better job at addressing their injuries.

The sporting world should follow suit as well, and make sure everyone knows about concussions; not to scare or change the sport, but to handle and manage this injury correctly.