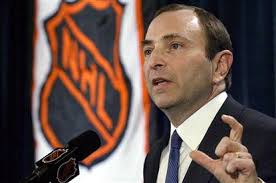 Gary Bettman announced after the first session of GM meetings in Florida that the NHL will now adopt a more rigorous protocol for players exhibiting concussion symptoms.

Under the new protocol, any player showing concussion symptoms must be examined by a doctor in the locker room. Until now, an examination on the bench by a trainer was the minimum requirement.

Bettman said the league also will study using smaller equipment and making the playing area safer. He said other rule changes might emerge from the meetings, which conclude Wednesday.

Kudos for getting the players off the ice and get them examined.  The Gravboski incident may have never occurred if this were in place weeks ago.  However this situation would not have changed the Crosby situation as his first head injury occurred at the end of the second period and went to the locker room.  It is assumed that IF Crosby told the medical staff that he had concussion symptoms he would have been evaluated.

This is a good start; now to get the players on board with reporting the issues…

One thought on “That Was Fast”