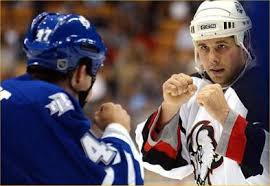 I was planning on writing a post about fatigue experienced after a brain injury, but last night (Saturday, March 5th) I caught some of ‘The Hotstove’ segment on Hockey Night in Canada and I had to write about it.

The last three minutes of the March 5th ‘The Hotstove’ is Mike Milbury railing against NHL-sanctioned violence and it’s definitely worth watching if only to see and hear the indignation with which his views are met by the three other panelists.  Pierre Lebrun (also a columnist with ESPN) actually uses the imaginary word “wuss-ification” when Milbury talks about changing the way the NHL looks at fighting.  Eric Francis (Calgary Sun), with one incredulous and contemptuous glare at Milbury shows us how this subject will likely be viewed by, not only the fan-base but, the traditional NHL media.  Milbury really hits a nerve when he suggests that fighting is part of the game because we (fans) “like it”.  This prompts proverbial ‘whoa’s and ‘pfff’s from the rest of the panel.  The ever-sagacious Ron Maclean says he likes “the threat of a fight”.  I like Ron Maclean, I think he does a great job, he’s smart and quick; unfortunately he seems to be a staunch hockey-traditionalist, not keen on seeing change to the game his career is based on.

Milbury obviously hit a sore point and the panel’s defenses went up. The NHL is having a major problem with concussions – that’s recognized.  The NHL players are bigger, stronger and faster, so collisions are harder – that’s recognized.  Malicious shots to the head should be banned – recognized.  It’s all part of the way the game is played and has policed itself, but rule changes are necessary – also recognized.  What’s NOT recognized, at least by the mainstream hockey media – is that the concussion trend is important enough that the entire NHL rulebook needs to be opened and examined.  Maybe the rules themselves don’t need to be changed. It’s probably just the enforcement of the rules (I wrote about this in another post).

On ‘The Hotstove’ segment on Hockey Night in Canada, Mike Milbury obviously walked into a wall of entrenched, sacred thought.  In his playing days, he once went into the stands (along with other Bruins teammates) to fight some fans, so he’s no angel, but that certainly doesn’t mean his points should be discredited.  If the NHL is truly committed, it needs to look at all the rules, not just the ones it can change without changing the way the game is played – because that obviously needs to change.  Maybe fighting can stay in the game, maybe it can’t, but at least look at it.  Look at ALL the rules.