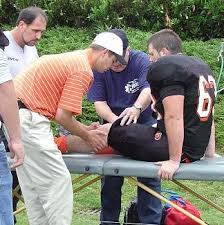 During the month of March we will continually highlight the work of an athletic trainer.  This series will incorporate open letters about the men and women of the profession from other professionals, the aim is to have at least one a week.  If there are others out there; parents, coaches, teachers, doctors, lawyers, athletes or anyone that would like to form a letter please do so and send it to theconcussionblog@comcast.net.

Will Carroll is a national sports writer, mainly focusing on fantasy sports and injuries.  I have had the luxury of bouncing ideas off of him during this process.  When I asked if he wanted to contribute to the blog for National Athletic Training Month he did not hesitate;

The greatest honor I’ve had over the ten years I’ve been covering sports injuries is being able to tell the story of Athletic Trainers. When you consider the work, the hours, the responsibility that teams are putting on the shoulders of these men (and women!) it’s amazing that they don’t get their own trading card. Sadly, most fans don’t even know the names, let alone the faces, but I know they can see their work out their on the field. When a player comes back from surgery, does he think of the hours of rehab that the medical staff put in on him? When a guy holds up a trophy and you see the scar on his elbow, does he think of the doctor? When the team holds up the championship, do we see the players that wouldn’t have been there if it wasn’t for the tape, the brace, the massage, the treatments, and the sweat of the Trainers? I’ve had the honor of telling that story and I’ll keep telling it as long as they let me.

Because it needs to be told.

Thank you Will for the kind words and I and we look forward to working with you in the future.