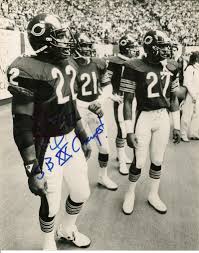 Dave Duerson was found dead in his Miami home on Thursday, and initially there was no reason given for his death.  Duerson was recently quoted in a newspaper article commenting on his fellow defensive teammate Richard Dent and his enshrinement into the NFL Hall of Fame.

Today the Chicago Tribune is reporting that the cause of death has been ruled a suicide;

The Chicago Tribune is reporting former Bears safety Dave Duerson died of a self-inflicted gunshot wound to the chest, and the co-director of a medical school program tells The Associated Press his family has agreed to donate his brain for research.

Chris Nowinski of the Sports Legacy Institute has confirmed that Duerson’s brain has been donated for research.

The initial report of his death can be found here.  What is shocking to most is that he had been in contact with former teammates very recently;

“When we spoke recently, he sounded great,” former Bears defensive back Shaun Gayle said. “It’s a real shock to all of the guys.”

Duerson is most known for his hard-hitting style in the defensive backfield, most notably with the Super Bowl Champion Chicago Bears of 1985.