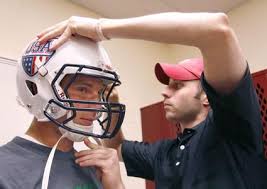 If you have watched any football over the past year, you may be thinking to yourself, “Helmets sure are coming off players a lot more.”  And you would be correct.  Although there is not a statistic for this, week after week, from the high school level up to the professional level,hats keep coming off.

“I’ve never seen it to the extent it’s taking place this year, at the college level and the pro level,” said Colts president Bill Polian, a member of the NFL’s competition committee. “I’m terribly concerned that we’ve got some sort of issue with the chinstraps or the helmet and we’ve got to look at that.”

The Indianapolis Star ran a story about such issues today.  However, I am about to talk out loud for a moment on this, and your comments/emails would be appreciated on this matter.

Sure, it looks scary and IS more dangerous to play the sport of football without the helmet on, but is it really a bad sign?  The NFL has implemented a good rule that if a ball carrier loses his helmet during action, the play is blown dead and the ball spotted at the point of interruption, as a safety measure.  Getting hit in the head without your headgear could be deadly.  But the fact that helmets are flying off may not be that bad… Hear me out…

Now remember this is coming from observations and education I have received, and could be WAY OFF THE MARK, but allow me to explain.

In order for a helmet to “explode” off the player a couple of things have to happen: 1. the chinstrap has to fail (either by becoming unsnapped or breaking) and 2. the force of the blow has to be upward in nature.  Lets examine the second parameter with the knowledge of Newton’s Laws of Physics and basic fundamental physics about energy, potential and kinetic.

If the force of the blow is primarily in the downward plane, into the head/skull the helmet will be forced onto the head keeping the helmet on and hopefully absorbing most of the forces created.  If we use Newton’s 2nd Law of Physics, then the acceleration of the helmet (coming off the head) is a result of the direction of force applied.  In other words it is impossible for a helmet to be removed via a hit if the force was down or sideways in nature.  And those downward/sideways forces are some of the most troublesome for the brain to absorb.  Energy/Force does not just disappear – it must be absorbed until at rest (hence the helmet function), Newton’s 3rd Law (equal and opposite reaction).

When a helmet goes flying in the air or off the player, some of that force that was applied to the player is now being transmitted into motion of the helmet, taking it away from the player’s head.  If the facemask or base of the helmet did its job protecting the individual, then the force being taken by the helmet means that the brain case is not getting that force.  This means the brain is not dealing with a disturbance, and maybe diminishing the concussion risk.

Before you fly off the handle, getting hit hard can and does create brain function disruption at some level, and as we should all know, YOU DO NOT HAVE TO GET HIT IN THE HEAD to receive a concussion.  Violent twisting and snapping forces to the body can make forces move somewhere (Newtons’s 3rd Law again), making the brain move in the skull, causing disruption and a concussion.

But if a force delivered by a tackler to a ball carrier that is straight on/from the side that creates a helmet coming off means the force was upward and even glancing, and the force applied to the head was redistributed to the force needed to make the helmet move from “rest”.

My convoluted conclusion is that helmets coming off during tackles (other than being ripped off) may not be such a bad thing if you take a look at how the Laws of Physics work.  If the helmet stays on it MUST take all the force, and when it cannot take any more force it is translated to the next “body” in line of the vector, which would be the head/face, and what is below that, your brain.  And my general observation is the most severely concussed (see DeSean Jackson, Heath Miller, et. al) the helmet has remained on, while some of the helmets are lost on hits (Maurice Jones-Drew, Jason Witten circa 2006), the players have walked away to grab their helmet and play on.

Remember this rant is not dismissing the fact that hitting your head without a helmet is HORRIBLE, the stoppage of play is needed and warranted.  Comment or email on this……